Fast And Furious 9: The Trailer of Vin Diesel and John Cena's Entertainer to Drop on January 31, 2020

Start the countdown as the trailer of Fast & Furious 9 is dropping in a month! 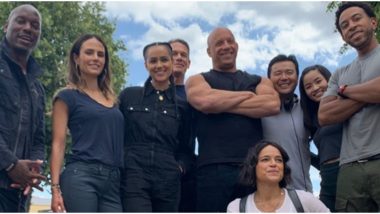 Sit tight and brace yourself for the trailer of Fast and Furious 9 is dropping right before you bid adieu to the first month of 2020. The cast of this action franchise will start the new year with a bang and we hope they match up to our sky-high expectations. Though Dwayne Johnson won't be a part of this sequel, John Cena's addition to the cast has taken our expectations a notch higher. While the trailer will be enough to boggle our minds, the makers plan to make the entire experience a lot more special by organising a live concert. You'll Be Blown Away: Vin Diesel on John Cena's Character in 'Fast and Furious 9'.

As per the official announcement Cardi B, Wiz Khalifa, Charlie Puth, Ozuna, and Ludacris will perform at the live concert that will be held in Miami, Florida on January 31. The original star cast of the franchise Vin Diesel, Michelle Rodriguez, Jordana Brewster, Tyrese Gibson, Helen Mirren, Ludacris, Nathalie Emmanuel, and Charlize Theron will return in this new sequel with new additions in John Cena, Finn Cole and Cardi B. Fast & Furious 9 Gets Faster and Furiouser as Cardi B Joins Vin Diesel and Gang (Watch Video).

Check Out the Formal Announcement

Fast and Furious 9 was earlier slated to release in April 2019 but with Dwayne Johnson and Jason Statham's Hobbs & Shaw releasing this year, the makers decided to postpone the release of their sequel. The Fast and the Furious: Tokyo Drift, Fast & Furious, Fast Five and Fast & Furious 6 director Justin Lin will return to the director's chair for this new outing that hits the screens on May 22, 2020.

(The above story first appeared on LatestLY on Dec 19, 2019 02:41 PM IST. For more news and updates on politics, world, sports, entertainment and lifestyle, log on to our website latestly.com).