Indian-origin Hollywood filmmaker M. Night Shyamalan says superstar Bruce Willis has always been like a big brother to him, and has protected him. 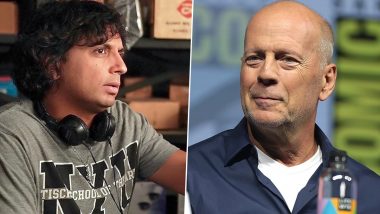 Los Angeles, Nov 7: Indian-origin Hollywood filmmaker M. Night Shyamalan says superstar Bruce Willis has always been like a big brother to him, and has protected him. Talking about his relationship with Samuel L. Jackson and Bruce Willis, Shyamalan said: "Sam and I had lightly kept in touch over the years, kind of see each other in Los Angeles, and said something very lightly. But Bruce and I have actually stayed in touch and our families have stayed close. So, we've stayed in touch and he's always been the big brother in my life for since I was a little kid, you know. He's the one that took the big risk on me and protected me," he added. Out Of Death: Jaime King Paired Opposite Bruce Willis in Mike Burns' Next.

The filmmaker said his bond with Willis is evident in the actor-director equation they shared in the 2019 film, "Glass". "There's always a special place for us, the two of us, to work again with him," he said, adding: "You might see that in the movie ('Glass'), this kind of sense of sentimentality about the relationship between me and him."

In "Glass", the director converged the world of his 2017 film, "Split", a story about a man with over 20 different personalities who kidnaps three teenage girls, and his 2000 release, "Unbreakable", about Willis' character David Dunn, who gets superhero abilities after surviving a train crash.

(The above story first appeared on LatestLY on Nov 07, 2020 10:29 AM IST. For more news and updates on politics, world, sports, entertainment and lifestyle, log on to our website latestly.com).