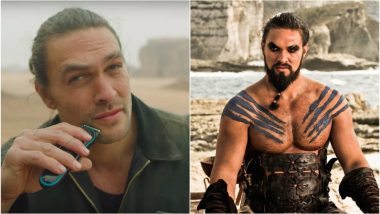 Game of Thrones is coming to an end and as everyone is gearing up to bid their favorite characters goodbye and now actor Jason Momoa who's character Khal Drogo, died in the first season of the series itself, has a different kind of goodbye to offer. The actor posted a video of shaving his beard and this is the first time he did this ever since 2012. As he shaved off his signature look of the Dothraki King and as the DC superhero, Aquaman he said, “Goodbye Drogo, goodbye Arthur Curry, goodbye Declan.”

Momoa's actions are not for the Game Of Thrones finale but in fact, to raise awareness of the destructive impact of plastics on the environment. In the video posted by him, he says, "I’m shaving this beast off, it’s time to make a change. A change for the better…for my kids, for your kids, the world. Let’s make a positive change for the health of our planet.”

“Let’s clean up our oceans and our land. Join me on this journey. Let’s make a switch to infinitely recyclable aluminum. Water in cans, not plastic", he further added.

Here's the video of Jason Momoa shaving his beard:

Of course, we all support Momoa for the good cause but his new look has set off the internet in a frenzy and they can't deal with Jason Momoa without a beard. RIP messages for his beard are now being tweeted. Check out some of the hilarious tweets.

911: ... you saw the photo of Jason Momoa without a beard didn't you#JasonMomoa pic.twitter.com/oCxWLhiuCI

So #JasonMomoa just posted a video on his Instagram that shows him shaving half his face and I was like NOOOOOOO!!

What's interesting is that the timing of Jason Momoa shaving off his Khal Drogo look now is making GOT fans to wonder if he waited because the actor makes an appearance in the final season. There has been a recent fan theory about Khal Drogo's return and while it seems highly unlikely, you never really know given the kind of surprises we have seen on the show. Would you want to see Khal Drogo back in the final season? Comment and let us know.

(The above story first appeared on LatestLY on Apr 18, 2019 09:44 PM IST. For more news and updates on politics, world, sports, entertainment and lifestyle, log on to our website latestly.com).