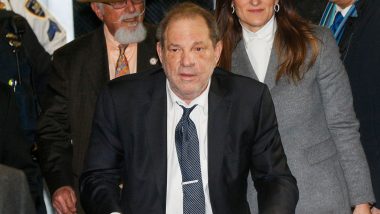 Washington D.C. [USA], Feb 25 (ANI): After being convicted of criminal sexual act and rape, former Hollywood producer Harvey Weinstein complained of chest pains and was taken to New York's Bellevue Hospital on Monday night, said his attorney Donna Rotunno. According to a report by CNN, the producer felt chest pain, heart palpitations and had high blood pressure before being admitted to the hospital. Weinstein's attorney told CNN that he was admitted to the hospital and "is OK," at the moment. Once he is released from the hospital, he will be transferred to a correctional facility. Harvey Weinstein Accusers Welcome the Conviction, Call It a Big Win of the #MeToo Movement.

A New York jury on Monday convicted the former Hollywood producer after a series of allegations against him. The movie mogul has been convicted of criminal sexual assault in the first degree, based on the testimony of Miriam Haley, and rape in the third degree, based on the testimony of one-time aspiring actress Jessica Mann, Hollywood Reporter said in its report. Harvey Weinstein Guilty of Rape and Criminal Sexual Act, but Acquitted of Top Sex Charges.

However, he was found not guilty of the more serious charges of predatory sexual assault and of rape in the first degree. The verdict by the New York jury is being hailed as a turning point in the widespread #MeToo movement which found exposure following sexual-abuse allegations against Weinstein.