Has Priyanka Chopra Planned to Move in with Her Boyfriend Nick Jonas?

Priyanka Chopra and Nick Jonas are returning to India. 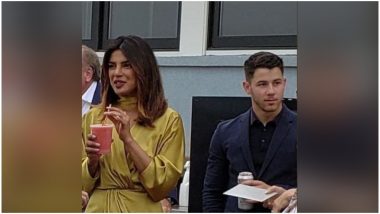 Priyanka Chopra and Nick Jonas are the latest hot couple of the town. The Baywatch hottie has grabbed headlines with her dating rumors with Hollywood singer-actor Nick Jonas. The two hit it off together at MET Gala and since then there was no stopping for the couple. Now just amid the speculations of them having a ‘serious relationship’, here comes another pleasantly stunning report. PC is reportedly planning to move in with Nick in his house and the duo is looking forward to living together soon, writes Life and Style.

A source close to the development told the publication, “Nick is telling pals that Priyanka is the one and he’s asked her to move in with him. Nick loves that Priyanka is older and more mature than his exes. There’s no game playing. They have a really easy relationship."

Meanwhile, the couple is expected to be in Mumbai for PeeCee’s housewarming party at Versova. The ‘Quantico’ lead star is said to have bought a lavish sea-facing abode worth Rs 100 crore. Nick will also meet desi girl’s close friends and mom, Madhu Chopra. A source earlier told Hollywoodlife.com, “Nick is falling hard for Priyanka, and he is very interested in making things serious really soon. All Nick really wants now that he has a career in something he loves, is to have a beautiful wife and a couple children to boot.”

(The above story first appeared on LatestLY on Jun 21, 2018 11:33 AM IST. For more news and updates on politics, world, sports, entertainment and lifestyle, log on to our website latestly.com).