Hawkeye: From Who the Rolex Watch Belongs to Kingpin in Episode 5, Here are All the Fan Theories Regarding Jeremy Renner’s Disney+ Show

Hawkeye is a 2021 Marvel Disney+ show that centers around the Avenger, Hawkeye. Jeremy Renner returns in the role of Hawkeye and this time is joined by Hailee Steinfeld's Kate Bishop. The show streams every Wednesday on Disney+ Hotstar at 1:31pm. 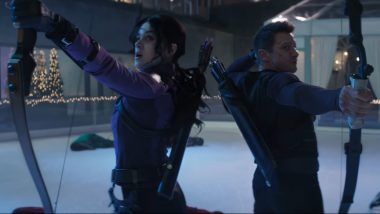 Hawkeye just has two more episodes left and fans are starting to get ecstatic. Till now in Hawkeye we have seen Kate Bishop played Hailee Steifeld get into trouble with the Tracksuit Mafia after she put on the Ronin costume. Clint, feeling responsible for it, takes it upon himself to help Kate and get her name cleared off while also getting the Mafia to stop hunting the Ronin. While doing this, both uncover a conspiracy that leads right back to Kate’s mother’s fiance, Jack. Hawkeye Episode 4 Recap: From Black Widow to the Secret Rolex Watch, 6 Plot Twists From the Fourth Episode of Jeremy Renner’s Disney+ Show (SPOILER ALERT).

Hawkeye has been exciting to say the least. The first four episodes provided great action packed entertainment and there is this feeling of a grander conspiracy at large. It’s great to return back to street level action in MCU, and we can’t wait to see where it goes from here. Fans have been running rampant with theories and just what will happen in the last two episodes of Hawkeye. So let’s take a look at five fan theories for the final two episodes of Hawkeye.

Who Does the Watch Belongs to?

The Rolex watch that was introduced in the first episode surely has gone from being insignificant to quite the huge plot point. Many fans have been wondering who the watch belongs to, and some are guessing that it might belong to Clint’s wife, Laura. Clint mentions that the Rolex belongs to someone he used to work with and their identity is still attached to it, so our best bet might be Laura, since we don’t exactly know how Clint and her met.

Did Laura Work at SHIELD?

Laura definitely showcased quite the information finding skills in episode four. So with the watch theory and this, did she actually work at SHIELD? She is also the one who brought up the watch to Clint so there definitely must be some connection. Even in Avengers: Age of Ultron Clint says that SHIELD helped set them up in their house.

Since Hawkeye takes a lot of inspiration from Matt Fraction’s run of the Hawkeye comic series, many fans have been wondering if Eleanor Bishop is Madame Masque. With just how sketchy she has seemed in the past few episodes, this doesn’t seem like a stretch. She definitely has some skeletons in her closet and with her calling someone unknown during the last episode to fix some stuff, it definitely looks like she might be planning something.

This is another fan theory that people have been playing around quite a lot with. We don’t see Kate’s father die, we just know that he is killed off screen. Again with Eleanor seeming sketchy, this doesn’t seem that far off as well. She certainly might have a hand in killing him and it feels like the show is building towards that. Hawkeye Episode 4 Review: Marvel Drops a Not-So-Surprise Cameo in an Underwhelming Outing for Jeremy Renner, Hailee Steinfeld Series (LatestLY Exclusive).

Well this seems the most plausible now out of all theories that there have been yet. Kingpin is definitely showing up considering just how important he is to Maya’s character. With the confirmation of Charlie Cox returning as Daredevil too, this seems inevitable. Also there was a pretty convincing scene in episode three that definitely showed that we are going to get to see Kingpin quite soon.

With the entrance of Florence Pugh’s Yelena Belova, things surely seem to be complicated, and her hunting down Clint has us extremely excited. Hawkeye streams every Wednesday on Disney+ Hotstar at 1:31pm.

(The above story first appeared on LatestLY on Dec 09, 2021 05:27 PM IST. For more news and updates on politics, world, sports, entertainment and lifestyle, log on to our website latestly.com).