James McAvoy is a man of great talent. In the last 10 years he has built himself up to be an actor to be on the lookout for getting global fame. But what got him there? It was his turn as Professor X in the X-Men films that earned him recognition and success. 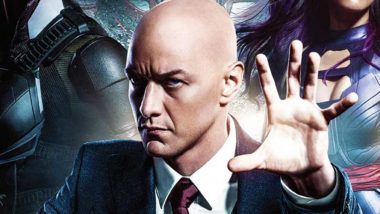 James McAvoy is a man of great talent. In the last 10 years he has built himself up to be an actor to be on the lookout for getting global fame. But what got him there? It was his turn as Professor X in the X-Men films that earned him recognition and success. First appearing in X-Men: First Class, he won fans over, that’s a huge feat considering he had to fill in Sir Patrick Stewart’s shoes. James McAvoy Birthday: From Split to X-Men - Here Are 5 Best Films Of the Scottish Actor.

McAvoy then went on to appear in 3 other X-Men films and was consistently one of the best parts about those films. So to celebrate his 42nd birthday, we are exploring as to why he was such a great Charles Xavier/Professor X:

He Made the Role His Own

Before McAvoy would go on to play the younger version of Charles, he was played by Sir Patrick Stewart in the previous X-Men films. Since X-Men: First Class was a prequel to those movies, McAvoy put a new spin on the character of Charles. He was youthful, he was energetic, a completely different character than what Stewart played, and I think that worked really well because he could stand out in his own way.

With these prequel X-Men films we got to see how Professor X goes on to become the character that we all know and love, and I think that’s beautifully explored in both X-Men: First Class and X-Men- Days of Future Past. Especially the latter which brings us to our next point.

His Performance in X-Men: Days of Future Past

This is where things really change up, since both the Professor X are present in this film. McAvoy truly shines here as he plays a broken Charles who has lost all his hope in humanity and it really shows you a different side of this character. It definitely wouldn’t have worked if McAvoy wasn’t at his best and oh boy, did he knock it out of the park, just his one scene with the older Charles is amazing and will give any X-Men fan goosebumps. James McAvoy Reveals Why He Stopped Following His One Particular Pre-Shoot Ritual.

His Relationship with Mystique

While the previous movies didn’t explore this, the prequels went all out with this concept. It’s his brother-like relationship with Mystique that made the character grounded and so sympathetic. It’s what drove his characters and the movies forward and made the experience all the more better.

His Chemistry with Michael Fassbender

When you have a younger Professor X , you’re bound to get a younger Magneto as well. Michael Fassbender acted the hell out of the role and his chemistry with McAvoy were the absolute highlights of the films. Brother in arms as they both are, their story is the crux of the X-Men films as their clash of ideologies is explored very well and the end of their friendship is just heartbreaking to witness.

(The above story first appeared on LatestLY on Apr 21, 2021 09:11 AM IST. For more news and updates on politics, world, sports, entertainment and lifestyle, log on to our website latestly.com).