James McAvoy revealed details about his one particular pre-shoot ritual which he used to follow religiously but stopped it later on. 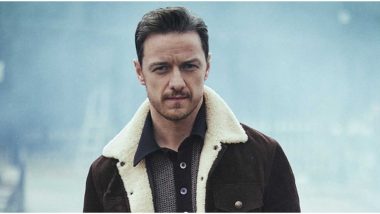 Actor James McAvoy says there was a pre-shoot ritual that he used to follow, but then he stopped because he found it "just stupid". Talking about what he does before the director says ‘action', McAvoy shared, "I for a little while or couple of years, was trying to make myself sort of tense as possible before doing a take and then just relax because it really made you feel relaxed. I would just repel myself into the scene but I stopped doing that because it's just stupid to do that." James McAvoy, Taron Egerton to Lead the Star-Studded Voice Cast for Audible’s The Sandman; Audio Adaptation of Neil Gaiman’s DC Comic Book Series.

McAvoy is known for his roles in movies like The Chronicles Of Narnia: The Lion, The Witch And The Wardrobe, The Last King Of Scotland and the X Men franchise in which he played Charles Xavier aka Professor X.

He has most recently reprised the role of Professor Xavier in X Men: Dark Phoenix, which released theatrically last year and will be telecast on Star Movies on Sunday. James McAvoy Birthday: From Split to X-Men &#8211; Here Are 5 Best Films Of the Scottish Actor.

On what it is about the character he finds juicy, McAvoy said, "It's Sir Juicy Charles! I mean he has changed and I have done four films and he has been pretty radically different in this psychological makeup every time I have played him but particularly the 1st one, 2nd one and this one and that is just as an actor that is like almost playing new character every time I come back to him. So it's fresh each time

(The above story first appeared on LatestLY on Jun 27, 2020 11:50 PM IST. For more news and updates on politics, world, sports, entertainment and lifestyle, log on to our website latestly.com).

Comments
Tags:
James McAvoy James McAvoy Pre-shoot ritual James McAvoy ritual The Chronicles Of Narnia: The Lion The Last King of Scotland The Witch And The Wardrobe X-Men
Comments
You might also like