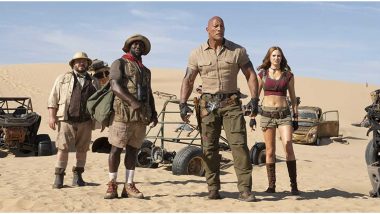 Jumanji: The Next Level could be the fun Christmas movie that you want, and perhaps, deserve, this year. Like with its previous film, the movie is set around Christmas, and deals with friendship, love, forgiveness and companionship, everything you look in the spirit of X-Mas. Moreover, it is highly entertaining too. Jumanji: The Next Level is the third instalment in the Jumanji franchise, that began with the 1995 film, with the late Robin Williams in the lead. The 2017 film Jumanji: Welcome To The Jungle acts as both the sequel and a soft reboot of the franchise, turning out to be a surprise hit that also went down well with the critics. Jumanji the Next Level Movie Review: Jack Black, Danny DeVito Steal the Show in Dwayne Johnson’s Glitchy but Funnier Sequel to the 2017 Film.

The latest film, Jumanji: The Next Level, directed by Jake Kasdan, is a fun followup with enough entertaining moments and a couple of thrilling sequences. The main cast - Dwayne Johnson, Kevin Hart, Karen Gillan and Jack Black - return in fine form and their comedic chops are further exploited for our fun's sake. Among the new additions, Danny DeVito and Awkwafina are just too good. There is also a horse that steals the third act with some surprising turns. And what's more, the movie ends with a promise of an exciting sequel.

Interesting, the previous Jumanji film ended with no notion of a sequel, where the teens break the videogame on hearing the ominous drum noises. And yet, we got one! Jumanji: The Next Level Premiere - Dwayne Johnson and Wife Lauren Hashian Make a Dazzling Red Carpet Debut Since Marriage (View Pics).

The Next Level, however, adds in a mid-credit sequence that changes the rules of the game and brings the film closer to the original Jumanji. Before we go ahead explaining what happens in the scene, let's warn you that the below article contains HUGE SPOILERS:

Let's talk about the climax first. The ending has Spencer (Alex Wolff), Fridge (Ser'Darius Blain), Martha (Morgan Turner) and Bethany (Madison Iseman) return to Spencer's basement in the real world, along with Grandpa Eddie (Danny DeVito) and Alex (Colin Hanks). Eddie's friend Milo (Danny Glover) stays back in the game, continuing to be the flying horse, Cyclone, as it offers him a chance to escape his impending death in real life. Spencer and Martha are back as a couple and the gang meet and chat at Nora's, a restaurant that was once run by Eddie and Milo with a different name. Eddie himself goes to the cafe and meets Nora (Bebe Neuwirth), and offers to work for her. To make things interesting, there appears to be a romantic tingling between the two. And thus, Jumnaji: The Next Level gets its happy ending, as the credits begin rolling.

A few seconds into the credits, and we get the mid-credit sequence that has Spencer's mother (Marin Hinkle) take a repairman to their basement to get the heater mended. The repairman sees the Jumanji game, which for some reason, the gang hasn't disposed of yet. Claiming that he loves video games, the repairman touches the exposed console of the game and activating it.

But there is a twist. While we aren't clear what happened to Spencer's mother and the repairman, if they are sucked into the game, the scene cuts back to the entrance of Nora's. We hear a rumble and then see a huge flock of ostriches that attacked Bravestone and gang in the desert earlier in the film, running on the road. The friends come out of the cafe and are left shocked at what just happened. Then, the credits resume. Towards the end of the credit-roll, we also hear the Jumanji drum noises and the squawk of an ostrich.

What Does It Mean for Jumanji 3?

The original Jumanji had a kid get sucked into the board game and return years later as a wild man, along with a lot of wild animals from the Jumanji forest, into his town. It looks like we are going to have a repeat of the same here. Another interesting aspect that connects The Next Level to the 1995 film Jumanji is the appearance of Nora, who, in the original film, was the aunt of Judy and Peter Shepherd, the kids who bring back Alan Parrish (Robin Williams) and help him finish the game. So does this mean we can see grown-up versions of Judy and Peter in Jumanji 3? Will Kirsten Dunst and Bradley Pierce return to reprise their roles?

Now let's look at the other conundrum that the mid-credit sequence leaves Jumanji 3 in. If Spencer and his friends have to face the wild animals in their town, then how would that justify the appearances of The Rock, Gillan, Hart and Black in the film? For that, won't they have to go back into the game and take back their avatars of Dr Bravestone, Ruby Roundhouse, Mouse and Professor Shelly?

As a matter of fact, they have to. Remember, the first movie had the protagonists earn their victory by completing the board game. Parrish only got sucked in the game, because he made a wrong move. In the last movie, Jumanji had evolved itself from being a board-game to being a video-game, which is why the leads were sucked into the game to finish it and make things right for themselves.

So to bring things back to normal in their town, the gang has to go back in the game and complete the new quest, whatever it is. There is also the matter that Spencer's mother (and the repairman) could have been absorbed in the game, and they need to save them too.

So what about the animals outside? Unlike Welcome to the Jungle, The Next Level showed us glimpses of what's happening in Brantford, their town when Eddie, Spencer, Martha, Fridge and Milo got sucked in. Bethany was left outside thanks to a glitch and she had to take Alex's help to return in the game. So perhaps Jumanji 3 might also opt for the same route. While Spencer and his friends go in the game to save his mother and their town, Eddie, Nora and probably, Alex, could try to control the animals outside the game or try and save the town's residents from their rampage. Like how X-Men: Days of Future Past did with two timelines.

Well, all these are just speculations right now. After all, the producers and stars are yet to announce when Jumanji 3 is going to come out. It is definitely going to happen, and the mid-credit sequence shows which direction the film might take. The only thing that might stop the sequel from the works is if Jumanji: The Next Level performs poorly. Well, that's not going to happen, is it?

(The above story first appeared on LatestLY on Dec 11, 2019 09:04 PM IST. For more news and updates on politics, world, sports, entertainment and lifestyle, log on to our website latestly.com).