Leonardo DiCaprio Birthday Special: From Inception to The Wolf of Wall Street, 5 of the Oscar Winner’s Best Films According to IMDb

Leonardo DiCaprio is known to be very picky with his roles and films, and his filmography surely speaks for it. You will hardly find a lackluster film from DiCaprio. All of his films are engaging, a treat to watch and are filled with a rich story. 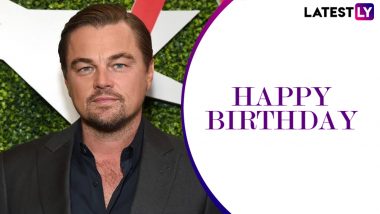 Leonardo DiCaprio is one of the most influential actors of this generation. He has garnered such an impressive set of films throughout his career that it is hard not to be impressed by the career this man has had. A real character actor, DiCaprio always makes sure to go all out with his characters. He doesn’t hold back and gives one great performance after the other. Jeff Bezos Girlfriend Lauren Sánchez’s Awkward Reaction After She Meets Leonardo DiCaprio at the Art Gala in Los Angeles Goes Viral (Watch Video).

Leonardo DiCaprio is known to be very picky with his roles and films, and his filmography surely speaks for it. You will hardly find a lackluster film from DiCaprio. All of his films are engaging, a treat to watch and are filled with a rich story. So to celebrate Leonardo DiCaprio’s 47th birthday, we are taking a look at five of his best films according to IMDb.

Directed by Martin Scorsese, The Wolf of Wall Street sees DiCaprio as Jordan Belfort. The film showcases his self-destructive lifestyle while telling his story of crime and how became the biggest stock broker in Wall Street. DiCaprio gives an electric performance portraying Jordan Belfort and perfectly captures his downfall.

This mind bending thriller tells the story of two detectives travelling to an island to find a murderer who escaped from the hospital for the criminally insane. Scorsese directs a film that showcases a delve into insanity and hits you with an ending so shocking that you will question everything you just watched.

Telling the story of a freed slave named Django, this joint directed by Quentin Tarantino is filled with revenge, action and snappy dialogue. Jamie Foxx headlines this film while he is joined by Christoph Waltz. DiCaprio plays the role of plantation owner and becomes one of the best antagonists that you will see in recent memory.

We already know that when Scorsese and DiCaprio collaborate, we will get one hell of a film, add Jack Nicholson and Matt Damon to the mix and what you get is one of the best crime thrillers ever. Following the story of an undercover cop trying to find a mole in the police all while trying to take down the Irish Mafia, The Departed is filled with unexpected turns and twists that will leave you shocked.

Christopher Nolan and Leonardo DiCaprio come together to make a project that is quite literally mind blowing. Following a thief who steals information through dream sharing, he is approached by a wealthy man for his job that can grant him immunity and finally let him see his kids again. DiCaprio gives a heartfelt performance that will make you root for him instantly. Don’t Look Up: Leonardo DiCaprio, Jennifer Lawrence’s Film Gets an Official Twitter Emoji.

We can see Leonardo DiCaprio next in Netflix’s Don’t Look Up. That looks like it is shaping up to be one of this year’s best films considering just how stacked the cast is. With this we finish off the list and wish Leonardo DiCaprio a very happy birthday.

(The above story first appeared on LatestLY on Nov 11, 2021 09:15 AM IST. For more news and updates on politics, world, sports, entertainment and lifestyle, log on to our website latestly.com).