Meghan Markle Accuses the British Royal Family of Racism in Oprah Winfrey Interview, Claims She Had Suicidal Thoughts During Pregnancy

Duchess of Sussex Meghan Markle claimed she felt alone fighting constant media speculation and falsehoods perpetuated by the firm, her description for the British royal family, ever since her marriage to the Prince Harry in 2018, in an explosive interview with Oprah Winfrey. 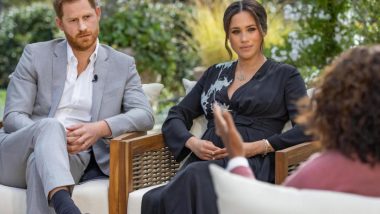 Duchess of Sussex Meghan Markle claimed she felt alone fighting constant media speculation and "falsehoods perpetuated" by "the firm", her description for the British royal family, ever since her marriage to Prince Harry in 2018, in an explosive interview with Oprah Winfrey. In the hotly-anticipated interview which aired on CBS on Sunday at 8 p.m., Meghan also accused the Royal family of being cold and racist, especially towards her and their son Archie, which pushed the couple away. Prince Harry-Meghan Markle On Oprah Winfrey Interview: Here’s How Tyler Perry Rescued The Couple After Their Security Was Stripped.

Meghan said the fear for their child, for whom no security was offered by the Royal family, and the growing scrutiny also had a damaging effect on her mental health, and she claimed going through suicidal thoughts while she was pregnant. "I was ashamed to say it at the time I just didn't want to be alive any more. And that was a very real and clear, and frightening and constant thought," she said in the two-hour pre-recorded interview, adding that the Palace refused to protect her. Meghan Markle On How Buckingham Palace Will React To Interview With Oprah Winfrey: How Could They Expect We Would Still Just Be Silent

"My regret is believing them when they said I would be protected," a teary-eyed Meghan said at the end of the interview she gave along with Harry. Meghan spoke at length about the issue of Archie's skin colour. "In those months when I was pregnant, we have in tandem the conversation of, 'He won't be given security. He's not going to be given a title', and also concerns and conversations about how dark his skin might be when he's born," she said, revealing that while the couple didn't refuse for the official photo when Archie was born, Markle was scared for his safety.

"There was a lot of fear surrounding it. I was very scared of having to offer up our baby, knowing they weren't going to be kept safe," she said, adding that the information was relayed to her by Harry, who later in the interview, refused to share the details of the conversation, or with whom he had the conversation, since he felt it would be "very damaging to them". "I went to human resources and asked for help and the person told me this. ‘My heart goes out to you because we see how bad it is. But we can't help you because you're not a paid employee of the institution'," recalled Meghan.

Harry later in the interview expressed how helpless and ashamed he felt around at that time, and later realised how he had been "trapped" all along just like the "rest of his family". Harry revealed that while he loves his grandmother, Queen Elizabeth II, and his brother, Prince William, despite the "space" between their relationship, he hopes "time will heal" it. Yet, he is not sure about his relationship with his father, Prince Charles, and feels "let down" by him, since Harry felt that the family had the opportunities to be there for them.

Harry referenced how his father stopped taking calls after the couple informed the Palace of stepping back as active members of the Royal family, before they had made the formal announcement. The media, too, then had accused the couple of blindsiding the Queen, with their decision. Harry refuted the rumours and claimed that he spoke with the Queen and his father, before making the formal announcement on January 7, 2020.

He also claimed that the family cut him off financially, and took away the security, which is what forced them to make deals with platforms such as Netflix and Spotify, to pay for the security for his family, including their upcoming baby, a girl. Harry added that the couple survived on the money left to them by his late mother, Princess Diana. Talking about Diana, Harry revealed that while she would have been "angry" at their decision to step back as Royals, she would have understood their decision, since it made them "happy".

(The above story first appeared on LatestLY on Mar 08, 2021 12:11 PM IST. For more news and updates on politics, world, sports, entertainment and lifestyle, log on to our website latestly.com).