Prince Harry-Meghan Markle On Oprah Winfrey Interview: Here's How Tyler Perry Rescued The Couple After Their Security Was Stripped

Prince Harry revealed in the interview with Oprah Winfrey that they were suddenly stripped of security when they moved to Canada last year. The person who helped them out during this situation was Hollywood filmmaker Tyler Perry. 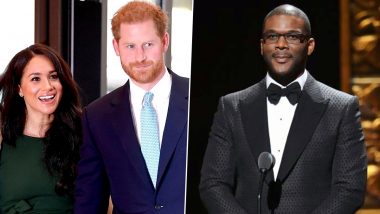 Prince Harry and Meghan Markle decided to break away from the Royal Family and last year, they moved to Canada. But it wasn't as smooth as it sounds. Harry and Meghan in their expose interview with Oprah Winfrey shared that their royal security was stripped all of a sudden and they panicked. That's when their friend Hollywood filmmaker Tyler Perry came to their rescue. He let them stay at his California residence for three months and also extended his security for their protection. Meghan Markle On How Buckingham Palace Will React To Interview With Oprah Winfrey: How Could They Expect We Would Still Just Be Silent

Speaking to Winfrey, Harry recounted, "While we were in Canada, in someone else’s house, I then got told, short notice, that security was going to be removed. At this point, everyone knew, thanks to the Daily Mail, our exact location.” He further added, "So suddenly it dawned on me, ‘Hang on, the borders could be closed, we’re going to have our security removed, who knows how long lockdown is going to be, the world knows where we are, it’s not safe, it’s not secure, we probably need to get out of here."

Tyler Perry offered Harry and Meghan his home for “several months” and he gave them his security too when they moved to the US #OprahMeghanHarry pic.twitter.com/Tf5kN0gJ9B

Harry revealed that the reasoning behind leaving them defenseless was a 'change of status' as they were not active members of the Royal family.

(The above story first appeared on LatestLY on Mar 08, 2021 11:45 AM IST. For more news and updates on politics, world, sports, entertainment and lifestyle, log on to our website latestly.com).