Minari Movie Review: A Poignant, Heartbreaking Showcase of the Failure of the American Dream (LatestLY Exclusive)

Why does one immigrate? In the hopes of finding a better life for themselves. With that comes the change of culture and trying to adapt, this is the position we find our protagonists the Yi family in. Immigrating from Korea to California, and then to Arkansas in hopes of starting a farm, Minari shows us the hardships that come along with shifting to a new country. 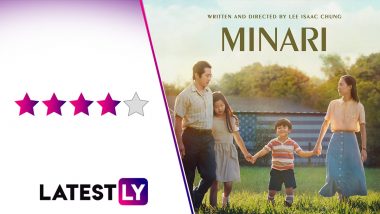 Minari Movie Review: Why does one immigrate? In the hopes of finding a better life for themselves. With that comes the change of culture and trying to adapt, this is the position we find Minari's protagonists, the Yi family, in. Immigrating from Korea to California, and then to Arkansas in hopes of starting a farm, Lee Isaac Chung's Minari shows us the hardships that come along with shifting to a new country in the hopes of achieving a better life. At the heart of the story is the Yi family, consisting of five members with, Steven Yeun as Jacob Yi and Han Ye-ri as Monica Yi playing the parents. Minari Actor Steven Yeun: Was Blown Away by the Story’s Simplicity and Truthfulness.

We then have the children, the elder daughter Anne Yi played by Noel Kate and the younger son David Yi played by Alan Kim. Later on, they are joined by the grandma Soon-Ja, played by Youn Yuh-Jung. The chemistry between all the actors feel real, they feel like a real family. When they are together you experience their joy, when they fight you experience their pain. You root for the family to succeed and I think that’s the biggest accomplishment of the film. You don’t hit that mark and the entire concept crumbles. You see the cracks beginning to form as Jacob and Monica’s relationship starts to strain due to him focusing more on the farm than his family. Minari Actor Steven Yeun Boards Jordan Peele’s Untitled Film Starring Keke Palmer and Daniel Kaluuya.

This sets up the arc for the movie properly and portrays the message of coming together and functioning as one really well. The scene stealer here is definitely the young Alan Kim; his portrayal of David is adorable and is surely the heart of Minari. The growth of the relationship between him and his grandmother is an absolute joy to witness, it’s the innocence of the child that gives levity to these moments after witnessing something heartbreaking and I think that’s what keeps Minari afloat. Him having expectations of his grandma following American traditions while she is strictly bound by Korean traditions make for some really funny scenes and act as a tension breaker in the more serious scenes.

The Korean culture itself is also represented with great care and the movie shows the hardships that come with trying to adapt to a new culture in a realistic way. The church scene in particular highlights that well. Also it's wonderfully shot and the sparse usage of the somber soundtrack is well done too. For my qualms with Minari I would say that the first act was slow. Took time for me to get fully engrossed into what’s happening. It’s the second act when the gears kick in and the movie gets more interesting. The character of Anne I feel was a bit underutilised, while acted well I think she didn’t have much bearing on the plot, but in the second half of the film her role significantly increases.

-Representation of the Korean culture

-Realistic portrayal of hardships with immigrating

-Can be really funny at times.

Minari is funny, uplifting and heartbreaking; it captures all the hardships one goes through with a shift in country and culture and portrays that wonderfully. The Korean culture is portrayed with great respect and care, and the message that Minari drives forward will leave you in tears by the end.

(The above story first appeared on LatestLY on Apr 16, 2021 10:06 AM IST. For more news and updates on politics, world, sports, entertainment and lifestyle, log on to our website latestly.com).