Nicole Kidman made an appearance at at a performance of Hugh Jackman's The Music Man revival and made her presence known when she bid $100,000 on a hat signed by Hugh. He then shared a video of the meeting on Twitter and thanked Nicole. 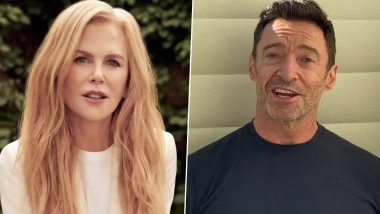 Hollywood star Nicole Kidman received a warm welcome on Broadway Saturday evening when she made an appearance at a performance of Hugh Jackman's 'The Music Man' revival. During an auction for the charity Broadway Cares/Equity Fights AIDS, Kidman made her presence known when she bid a hefty sum of $100,000 for a hat signed by Jackman, reports Variety. Jackman shared a video of the meeting on Twitter, thanking his fellow Australian thespian for her support. Nicole Kidman Leaves Hugh Jackman Surprised As She Bids the Latter’s Hat at 100,000 Dollars! (Watch Video)

"I love you. I love Broadway. And I love what they do, Broadway Cares, but I also want to say this show is extraordinary," Kidman said, taking the microphone after approaching the stage at the Winter Garden Theatre. "I've known Nic for almost 30 years. I've worked with her. I can tell you this is not a surprise to me. She is one of the most generous souls I know," Jackman said, quoted by Variety.

"You're a beautiful person. I love you. Thank you." According to Variety, Kidman's shouted bid of $100,000 drew an enthused response from the crowd, leading Jackman to joke "I just want to be clear, this is not Australian dollars." (Under current conversion rates, Kidman's bid amounts to $148,744 Australian dollars.)

The 'Music Man' cast had been raising funds for Broadway Cares/Equity Fights AIDS at the conclusion of recent performances. "Ms Kidman's remarkable support of Broadway Cares/Equity Fights AIDS on Saturday night was wonderful to see and her extraordinary generosity will be deeply appreciated by the entire Broadway community," Kate Horton, producer of 'The Music Man', shared in a statement. "Broadway Cares is blessed with friends across Broadway. But we have no greater champion than Hugh Jackman. Deadpool 3: Ryan Reynolds and Hugh Jackman Release a Hilarious Video Explaining Wolverine’s Appearance in the Superhero Film.

This extraordinary gift from his pal Nicole Kidman is by far the largest donation for any one auction item ever. That's 20,000 meals and 2,000 doctor visits this holiday season for those living with HIV/AIDS, struggling with COVID-19 or facing other life-threatening challenges," Tom Viola, Broadway Cares executive director, said. "Donations made at 'The Music Man', all across Broadway, Off-Broadway and at national touring productions will provide meals and medication, health care and hope this holiday season," Viola noted.

(The above story first appeared on LatestLY on Nov 28, 2022 04:17 PM IST. For more news and updates on politics, world, sports, entertainment and lifestyle, log on to our website latestly.com).