Salma Hayek Opens Up on Why She Cried During Desperado Sex Scene Shoot, Says ‘I Was Not Letting Go of the Towel’

Salma Hayek recalls how her Desperado co-star Antonio Banderas helped her when she started tearing up on the sets of the 1995 film, and says he is an absolute gentleman. She opens up on why she cried during Desperado xex scene shoot. 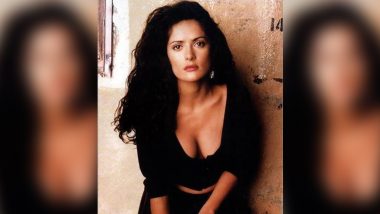 Hollywood diva Salma Hayek recalls how her Desperado co-star Antonio Banderas helped her when she started tearing up on the sets of the 1995 film, and says he is an absolute gentleman. "So, when we were going to start shooting, I started to sob (and said) 'I don't know that I can do it. I'm afraid'," she recalled. Ahead of 53rd Birthday, Salma Hayek Shares a Bikini Picture Sending Instagram Into Meltdown.

"One of the things I was afraid of was Antonio - he was an absolute gentleman and so nice, and we're still super close friends - but he was very free. It scared me that for him, it was like nothing. I started crying, and he was like, 'Oh my God. You're making me feel terrible'. And I was so embarrassed that I was crying," she said, according to a femalefirst.co.uk report. Salma Hayek Joins the Bernie Sanders Viral Meme Bandwagon, Shares a Snowy Picture!

She also said that the film's director Robert Rodriguez had never put pressure on her to do something she was uncomfortable with. Salma said that she found it difficult to get through the scenes without crying.

"I was not letting go of the towel. They would try to make me laugh. I would take it off for two seconds and start crying again. But we got through it. We did the best with what we could do at the time," Salma told Dax Shepard and Monica Padman during the Armchair Expert podcast.

(The above story first appeared on LatestLY on Feb 17, 2021 12:26 PM IST. For more news and updates on politics, world, sports, entertainment and lifestyle, log on to our website latestly.com).