Snake Eyes Review: Henry Golding’s Action Film Is ‘Boring’ As Per the Critics

Robert Schwentke's Snake Eyes starring Henry Golding has received a mixed response from critics where the performance of the lead has been lauded, but overall it's no fun. Read the reviews here. 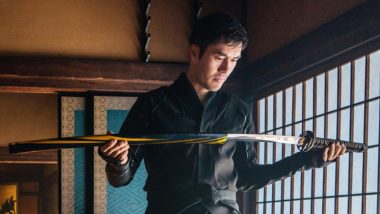 Directed by Robert Schwentke, Snake Eyes: G.I. Joe Origins, also called Snake Eyes is an actioner that has released in theatres in the USA on July 23. The flick stars Henry Golding as Snake Eyes, Andrew Koji as Storm Shadow, Takehiro Hira as Kenta, Úrsula Corberó as Baronness, and Samara Weaving as Scarlett. For the uninitiated, the movie is based on Hasbro's G.I. Joe media franchise, but also is an origin story for the titular character. Early reviews of Snake Eyes are out and so let's check out how the film has fared. Snake Eyes Final Trailer: Henry Golding Gets Suited Up To Feel At Home In This Action-Adventure Movie (Watch Video).

Indie Wire: "Snake Eyes is such a generic “cage-fighting orphan gets recruited into the Yakuza and then tries to earn his way into Japan’s most respected ninja clan” story that the valuable I.P. behind it seems almost irrelevant until the third act."

The Guardian: "The flying fists may make this a relative anomaly for the multiplex release calendar, but that should be understood as the faintest possible praise, an acknowledgment that we’re looking at one of the more interesting varieties of boring movie." Snake Eyes: G.I. Joe Origins Trailer - Henry Golding Turns An Assassin With A Purpose In This Reboot Of The Action Franchise (Watch Video).

The Philadelphia Enquirer:  "Like many toy-based movies, Snake Eyes might be betting too much on audiences caring about the connections to a broader universe of Joes more than the story in front of them."

Screen Daily: "Whether it’s the uninspired dialogue or the toned-down violence, Snake Eyes feels like a tame, anonymous product, saddling its main character with a tepid tragic backstory in the hopes that it will add poignancy to his narrative arc."

The Hollywood Reporter: "As shamelessly corporate popcorn movies go, Snake Eyes is better than most. That’s not high praise, but considering the film’s dopey pedigree, it’s not nothing."

In India, Snake Eyes will be distributed by Viacom18 Studios. Talking about the reviews, while some have praised Golding's performance in the film, overall, it has been a major disappointment for many. Stay tuned!

(The above story first appeared on LatestLY on Jul 23, 2021 03:16 PM IST. For more news and updates on politics, world, sports, entertainment and lifestyle, log on to our website latestly.com).