Taylor Swift Birthday Special: 8 Songs of America's Sweetheart That You Must Listen Or You Better Be Living Under A Rock (Watch Videos)

On the occasion of Taylor Swift's 31st birthday, here's listing 8 of her best songs. These are numbers that you should hear or else you've been living under a rock all these years. 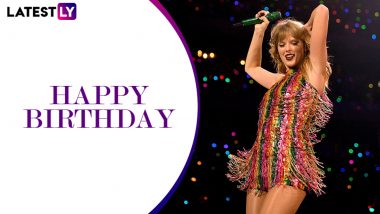 Tylor Alison Swift is not just America's but also all us girls' sweetheart. Well, she made all of our teenage quite bearable by regaling us with relatable AF songs about love, heartbreak, friendship and all things that mattered at that age. Born on December 13, 1989, Taylor Swift, in today's times is one of the top singers and song writers in the world. Well, given how her song-writing stems from her personal experiences, has always worked in her favour. And we too are not complaining. Taylor Swift Creates History by Staying #1 on the Billboard 200 Chart for 47 Weeks.

Taylor Swift has so far amassed 10 Grammy Awards, 1 Emmy Award, 7 Guinness World Records, 32 American Music Awards and and 23 Billboard Music Awards. She also has record sales of over 200 million worldwide, is ranked 8th on Billboard's Greatest of All Time Artists Chart among other achievements. 'Taylor is Free' Trend is on Fire as Fans Gush and Wait for Taylor Swift to Finally Re-record Her Old Music, View Tweets in Support of The American Singer!.

And on the ocassion of the beauty's 31st birthday, here's listing 8 of her best songs. These are numbers that you should hear or else you've been living under a rock all these years. AMA 2020 Full Winners' List: BTS, Taylor Swift, The Weeknd, Dan + Shy Win Big at the Musical Night!.

This was another very earlier Taylor Swift-sung romantic ballad that we love. Even though it was picturised on Miley Cyrus, Taylor was seen in her cutesy blond curls and made quite the impression.

This was personally the first Taylor Swift songs that I ever heard and was totally floored. The song is relatable AF as it is about a relationship that parents don't support of. The song solidified Taylor as an artist here to stay. No doubt, the music video is as pretty as the song.

Teardrops On My Guitar

This Taylor Swift song will must have had any and all persons reaching for tissue boxes after listening to it. A song about unrequited love, Teardrops On My Guitar is every teenage human's ham, who has definitely gone through a phase on on-sided love and heartbreak.

I Knew You Were Trouble When You Walked In

This is one Taylor Swift that is inspired from the classic saga - good girl falls for the bad boy. The music video for I Knew You Were Trouble When You Walked In was a far cry from most of her music videos and won her points with fans and her critics as well.

We Are Never Ever Getting Back Together

This Taylor Swift song sees the lady deliver a rather harsh message to one of her exes - We Are Never Ever Getting Back Together. And she reiterates throughout the song all the reasons why they will never get back together again. Well, get the message man! Oh did we mention how cute Taylor looks in the music video?

This Taylor Swift single saw the songstress explore the depth and intensity of how when one feels true love and it resonated with the masses. Red is now a classic song and fans still listen to it, years after its release.

Bad Blood just makes it to the list purely because of the music video. Taylor had her entire girl squad play key parts in it and we were totes floored by it, not to mention that catchy AF rap by Kendrick Lamar and the futuristic approach that the video had.

This is one fun filled Taylor Swift song that sees the lady take a dig at herself and her list of failed romances over the years. Afterall, if you can't beat them, then join them, right Taytay? Also, the music video is super fun to watch and Taylor literally does everything violent that us girls feel after break up. Well, we'll live vicariously through you for now.

In all honestly, the list of our favourite Taylor Swift songs could go on and on and on. Well, such is the magic of the songstress. Happy Birthday Taylor Swift! Here's to many more years of awesome song making and livening up our lives.. oh and tonnes of more awards!

(The above story first appeared on LatestLY on Dec 13, 2020 09:10 AM IST. For more news and updates on politics, world, sports, entertainment and lifestyle, log on to our website latestly.com).