The Broken Hearts Gallery is a American romcom directed by Natalie Krinsky, while Selena Gomez serves as an Executive Producer. Dacre Montgomery and Geraldine Viswanathan play the leads, while Utkarsh Ambudkar, Molly Gordon, Phillipa Soo, Bernadette Peters and Arturo Castro are in the supporting cast. Popular supermodel Suki Waterhouse has a cameo in the film. 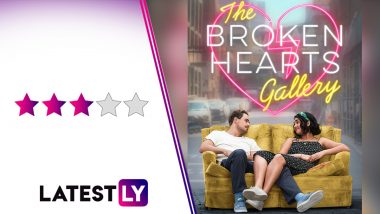 The Broken Hearts Gallery Movie Review: Lucy (Geraldine Viswanathan), an art gallery employee, gets her heartbroken by her colleague and much older and philandering lover Max (Utkarsh Ambudkar), after an embarrassing incident that also sees her fired from job. The very same night, a depressed and tearful Lucy meets Nick (Dacre Montgomery)after mistaking him for a Uber driver. By their next meeting, Lucy is already trying to make Nick her friend, even if he isn't very pleased by the idea. The Broken Hearts Gallery Trailer: Dacre Montgomery and Geraldine Viswanathan Welcome You to a World of Memories Where Romance Brews.

Lucy, who is hoarder, loves to keep stuff from her exes, much to the chagrin of her best friends and roommates, Amanda (Molly Gordon) and Nadine (Phillipa Soo). Nick is trying hard to open his restaurant with his friend Marcos (Arturo Castro), having troubles in getting finance for it. During their conversation, Lucy has an idea to start The Broken Hearts Gallery in his restaurant, where people can donate things that remind of them of their exes, and Lucy, who aims to be an art gallery owner, could start an exhibition.

While that idea might sound stupid, there is no one in this world who has their heartbroken, so Lucy's gallery idea is a success and becomes a talking point.

Of course, in trying to make it happen brings Lucy and Nick closer, and you know where it is heading, right? Don't worry, the film exactly ends the way you want it to be. Sticking to the cliched formula might be off-putting and frustrating - you have the 'opposites attract' formula, you have the customary ex returning trope, you have the basic misunderstanding and you have the perfunctory happy ending.

While I was annoyed that The Broken Hearts Gallery doesn't bother to break the formula, the easy-going treatment by director Natalie Krinsky, the adorable humour and its pleasant leads save the film from being a bore. Geraldine and Dacre bring so much charm and energy in this romcom that it isn't easy to hate it all. Especially Geraldine Viswanathan, who is soon becoming one of Hollywood most promising rising stars. She is the Heart in the film that deals with Broken Hearts and her enthusiastic performance sails the film through some very tired portions (especially in the latter half).

Montgomery is restrained and amiable, unlike how we saw him in his more popular role in Stranger Things, creating the 'opposite effect' for Lucy's bubbly nature. Even the supporting cast makes the film much more bearable than it deserves. Molly Gordon as the morbid-obsessed Amanda and Phillipa Soo's lesbian heartbreaker Nadine steal the show whenever they are on screen. And so do Arturo Castro as Nick's wise-cracking friend.

If it were not for the actors and the light-hearted treatment, The Broken Hearts Gallery could have added one more memorabilia of a broken heart - your wasted time.

- The Supporting Cast and the Easy-Going Treatment

The Broken Hearts Gallery is an enjoyable enough romcom, more so for its leads' pleasant, attractive chemistry. Especially watchable for Geraldine, who is rising from heights to heights, after that breakout performance in last year's Blockers.

(The above story first appeared on LatestLY on Nov 27, 2020 01:30 PM IST. For more news and updates on politics, world, sports, entertainment and lifestyle, log on to our website latestly.com).