Jon Favreau's The Lion King is all set to hit the screens this Friday. The film is a reboot of the 1994 Disney original that is still cherished by many as one of the best-animated films ever made. The Lion King has some big names such as Beyonce Knowles Carter, Donald Glover and James Earl Jones among others as voice actors. Here are more deets about the film. 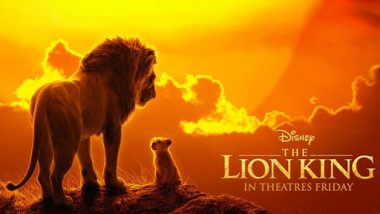 Disney's classic 1994 animated film The Lion King gets a CGI enhanced photo-realistic reboot. It is Jon Favreau who takes the director's seat to helm this grand VFX fest film. The idea of remaking it in this format was made possible by the success of Jon Favreau's 2016 film The Jungle Book. The trailer of The Lion King got an overwhelming response from the viewers and creating all amount of buzz for exactly replicating the trailer of the original animated series.

The Lion King releases in India and the USA on July 19, having already released in China on July 12. The film has received mixed reviews with everyone lauding it for its visual effects, background score and vocal performances, As you book tickets for The Lion King, here all you need to know about Disney's live-action film. The Lion King Movie Review: Jon Favreau’s Remake of the Classic Disney Tale Trades Impactful StoryTelling for Stunning Imagery

The Lion King follows the same storyline as its original 1994 animated movie. Little Simba's father Mufasa is betrayed by his own blood, his brother Scar who takes on the animal kingdom with the help of Hyenas. As a cub, Simba runs away from his kingdom only to learn the true meaning of responsibility and bravery.

Here is the Official Trailer of The Lion King

Here is the Official Hindi Teaser of The Lion King

The budget for Jon Favreau’s The Lion King is estimated at around $250 million.

Can You Feel the Love Tonight

Predicting The Lion King's box-office business Deadline wrote By Sunday, global on The Lion King is bound to reach $450M+. Simba already opened to a $54.2M debut last weekend in China and that country is expected to clock just over $100M by Sunday. According to the Variety, "The Lion King has pounced on the China market a week ahead of its U.S. release with a $53.8 million three-day debut that gave it pride of place at the Chinese weekend box office".

Our reviewer Sreeju Sudhakaran's final thoughts on Disney's fantasy film - "Like with The Jungle Book, Jon Favreau once again scores visually with his remake of The Lion King. The stunning imagery will captivate you as long as the movie lasts and the voice-cast is excellent. And yet, The Lion King remake ends up being unmemorable because the visuals enhancements come at the sacrifice of a lack of depth in storytelling and rushed character development. Watch the remake for the visuals, revisit the original for the missing magic" Click here to read the complete review of The Lion King.

(The above story first appeared on LatestLY on Jul 17, 2019 09:20 PM IST. For more news and updates on politics, world, sports, entertainment and lifestyle, log on to our website latestly.com).