Ryan Murphy's Netflix original movie, The Prom, has started streaming on the platform. For the audience, who are aware and fans of Murphy's visual palette, this one is a delight. However, the critics have pretty much pointed out the same things with The Prom as were with Murphy's series, Ratched - all flash and no substance. 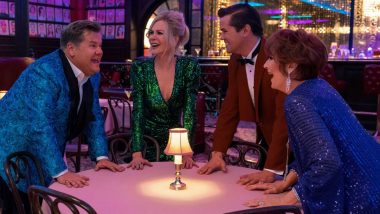 Ryan Murphy's Netflix original movie, The Prom, has started streaming on the platform. For the audience, who are aware and fans of Murphy's visual palette, this one is a delight. However, the critics have pretty much pointed out the same things with The Prom as were with Murphy's series, Ratched - all flash and no substance. The reviews tilting in favour of The Prom are few. However, no amount of criticising has ever stopped fans of Muprhy from consuming his work like M&Ms. So, in case you are interested, here's what the critics are saying about the film globally. The film stars Meryl Streep, James Corden, Nicole Kidman, which should be reasons enough for you to watch it. The Prom Trailer: Meryl Streep, Nicole Kidman Dazzle a Small Town to Help a Lesbian Couple Conquer (Watch Video).

The Indian Express criticised the writing of the film,. which Shalini Langer called headache-inducing musical. "Murphy and writers Chad Beguelin, Bob Martin are unclear about where they want to go," the author wrote, adding, "Smith’s entourage, that includes an utterly-utterly wasted Kidman, starts out seeming like a parody on celebrity culture, its narcissism and its shallowness. But, sure enough, like most glossy Murphy productions, the film is ultimately about showbiz offering the world "the much-needed escape it needs from the harsh realities of life". Meryl Streep Is Rapping in The Prom, Director Ryan Murphy Says 'Fans Are Going to Go Crazy for It'.

The New York Times' Manohla Dargis wrote, "The tolerance message in “The Prom” is sincere, no matter how satirically delivered. And it’s easy to imagine that onstage the whole thing came off as charming (as a friend insisted), a quality not in Murphy’s paint box.  Murphy likes to go big and lightly bonkers, and his aesthetic is best described as Showbiz Expressionism: it’s splashy and ostensibly excessive without being threatening."

Polygon's Roxana Hadadi wrote, "For the most part, The Prom wants to affirm viewers of their moral rightness by insulting the pervasiveness of small-minded cruelty and mocking how fervently people stick to misguided stereotypes. So many of the Broadway actors’ songs lean into this perspective, and to be fair, are some of the film’s best-shot performances. But The Prom pivots in its final third into a tidy parable about forgiveness, a cloying narrative turn that begs us to pity James Corden, which I cannot, and will not, do."

Variety's Owen Gleiberman praised the actors. "Corden may be criticized in some quarters for portraying Barry as a gay stereotype, but like Christopher Guest in “Waiting for Guffman” he burrows so deeply into the character’s quibbling insouciance that he gives him a three-dimensional essence. He’s soulfully funny and touching. Streep is sensational, and Key brings a disarming sincerity to his role as a lonely secondary-school lifer who, when Dee Dee’s around, seems to be waking up from a dream," the author wrote.

The Hindu''s Mini Anthikad Chibber wrote, "If there is one problem with this goofy musical, it is the length. It is just about 20 minutes too long. Other than that, it is one happy, glittery, star-spangled ride with the big musical numbers, the dancing, the sequins, the smiles, the tears and the twirls."

The New Yorker's Anthony Lane was not impressed. "How much alcohol you should insert into your bloodstream before attempting to watch “The Prom,” the new Ryan Murphy film, is not easy to gauge. It may well be most amenable to the completely blotto," the author wrote.

(The above story first appeared on LatestLY on Dec 13, 2020 05:00 PM IST. For more news and updates on politics, world, sports, entertainment and lifestyle, log on to our website latestly.com).