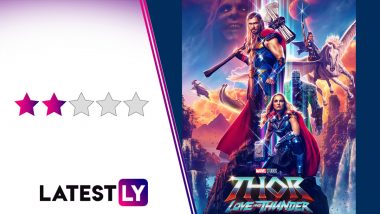 Thor Love and Thunder Review: Thor: Ragnarok reinvigorated Thor (Chris Hemsworth) back in 2017. Taika Waititi brought a great sense of fun and comedy to this character. Before that happened, the God of Thunder felt like a drab character in the MCU, but Ragnarok gave him a more likeable personality and introduced us to Hemsworth's comic skills. The franchise really needed Taika Waititi back then. However now, after watching Thor: Love and Thunder, I am left wondering, does it need him anymore? Thor Love and Thunder Review: Critics Call Chris Hemsworth and Natalie Portman's Marvel Film A Fun Time With An Uneven Plot.

Written and directed by Waititi, Thor: Love and Thunder is the fourth solo outing for the God of Thunder, which is a first for a MCU hero. With him tagging along with the Guardians of the Galaxy at the end of Avengers: Endgame, Thor seeks to find inner peace while leaving his fighting days behind him. However, the arrival of Gorr the God Butcher (Christian Bale) who wants to end all gods, Thor must wield the Stormbreaker once again and gather a motley crew of heroes to defeat the new enemy. 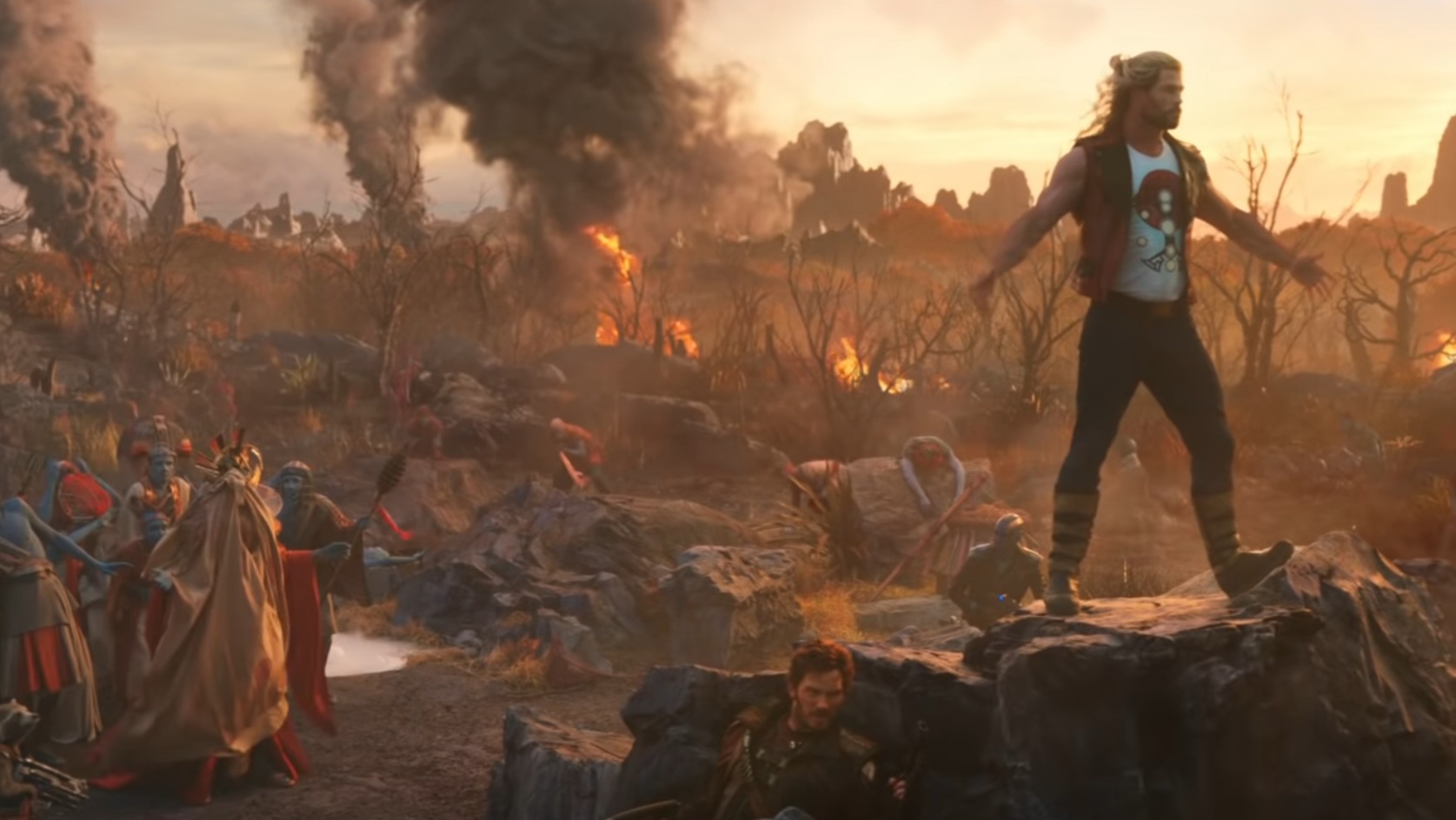 Soon after, we see Thor meet Jane Foster (Natalie Portman) who has wielded a broken Mjolnir out of nowhere. With the couple having been broken up for the last eight years, feelings are rekindled and so starts the love story of Thor: Love and Thunder. The best way to describe the film would be that it feels something straight out of Adam Sandler’s Happy Madison Productions. It’s like Marvel gave Waititi about $200 Million and told him to make whatever he wants. So he invited his friends over on a Sunday, and this is the result. Not really sure how to feel about that, but hey, it looks like the cast is genuinely having fun being there.

The romance between Thor and Jane is the strongest part of this film. It actually got me invested in their chemistry and didn’t feel like they were forcing it. There was a natural connection and the stakes present here (those who have read the comics know what I am talking about) make for a very compelling, and surprisingly, heartfelt story.

Chris Hemsworth has honestly perfected this version of the character now. This is his funniest outing as Thor, even going over Ragnarok. That hilarious energy is then matched with the reintroduction of Janes Foster too, who kicks a lot of butt in this film. Jane Foster is better than ever, and when the tip of her Mjolnir meets her enemies, you better make sure to strap in. Thor Love and Thunder: Christian Bale Reveals Peter Dinklage and Jeff Goldblum's Roles Are Cut From the Marvel Film (Watch Video).

Foster also grounds the film in many ways, with her side plot, that I can’t reveal here, very much being picked up straight from the comics, and there is a certain dose of emotion added. Talking about emotions, Christian Bale returns to his first comic book role since The Dark Knight Rises, and he doesn’t disappoint when on screen. Guess you do live long enough to see yourself become the villain. 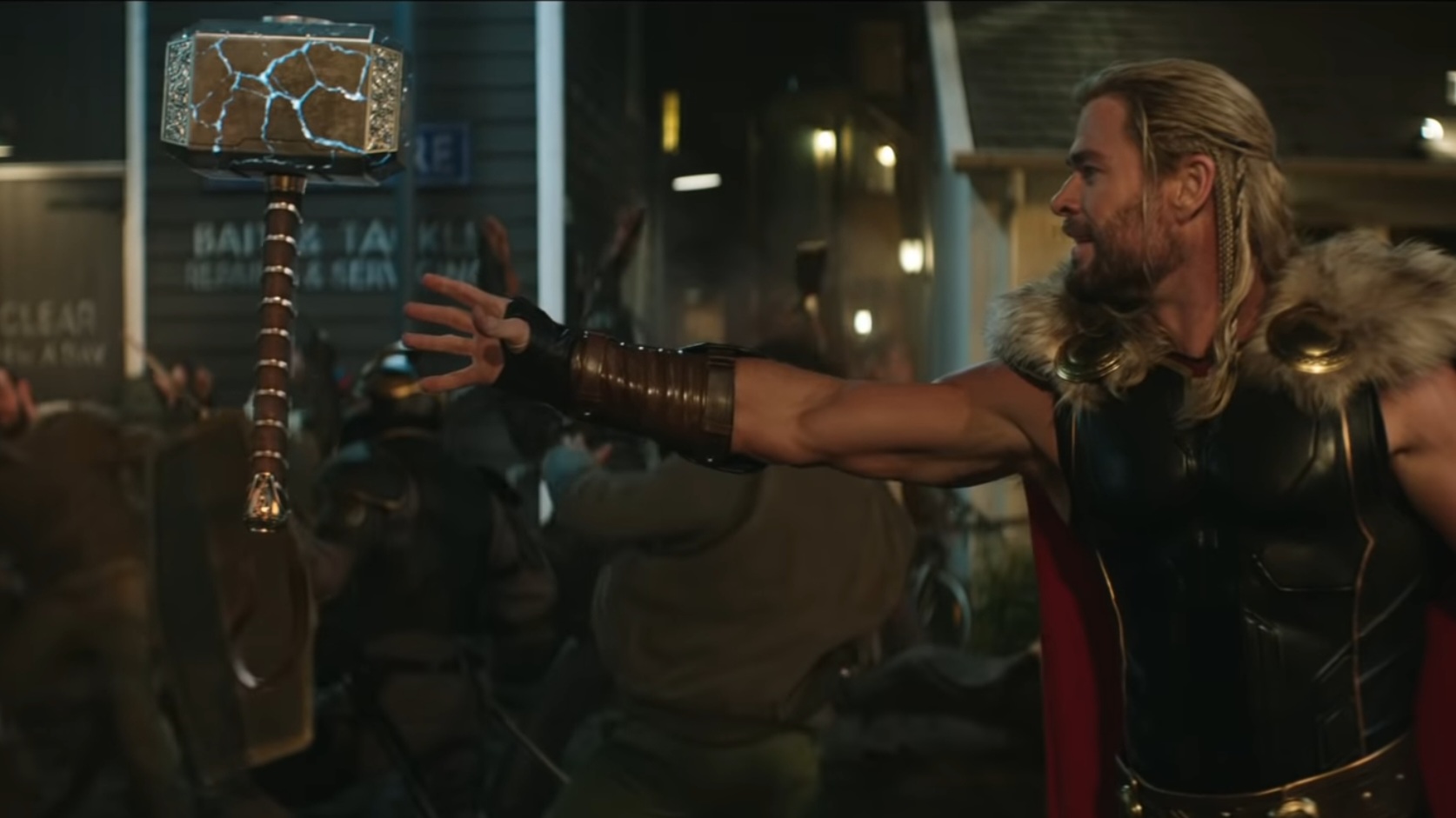 When Bale is on screen as Gorr, the magic is very much there, but the film needed so much more of him. Bale portrays a creepy and repulsive villain, whose revenge story needed to be explored more. While he, with his ghastly makeup, made for a great screen presence, the writing hardly focused on him, which makes Gorr devoid of genuine depth. Thor Love and Thunder: Know More About Christian Bale's Supervillain Gorr Set to Debut in Chris Hemsworth's Marvel Film!

Tessa Thompson and Waititi return as Valkyrie and Korg, and while their portrayals are great, the characters themselves don’t have much to offer. Likewise Russell Crowe’s extended cameo as Zeus. Portraying a drunk uncle version of the Greek God who is full of himself, I was just waiting for his scene to be done with. 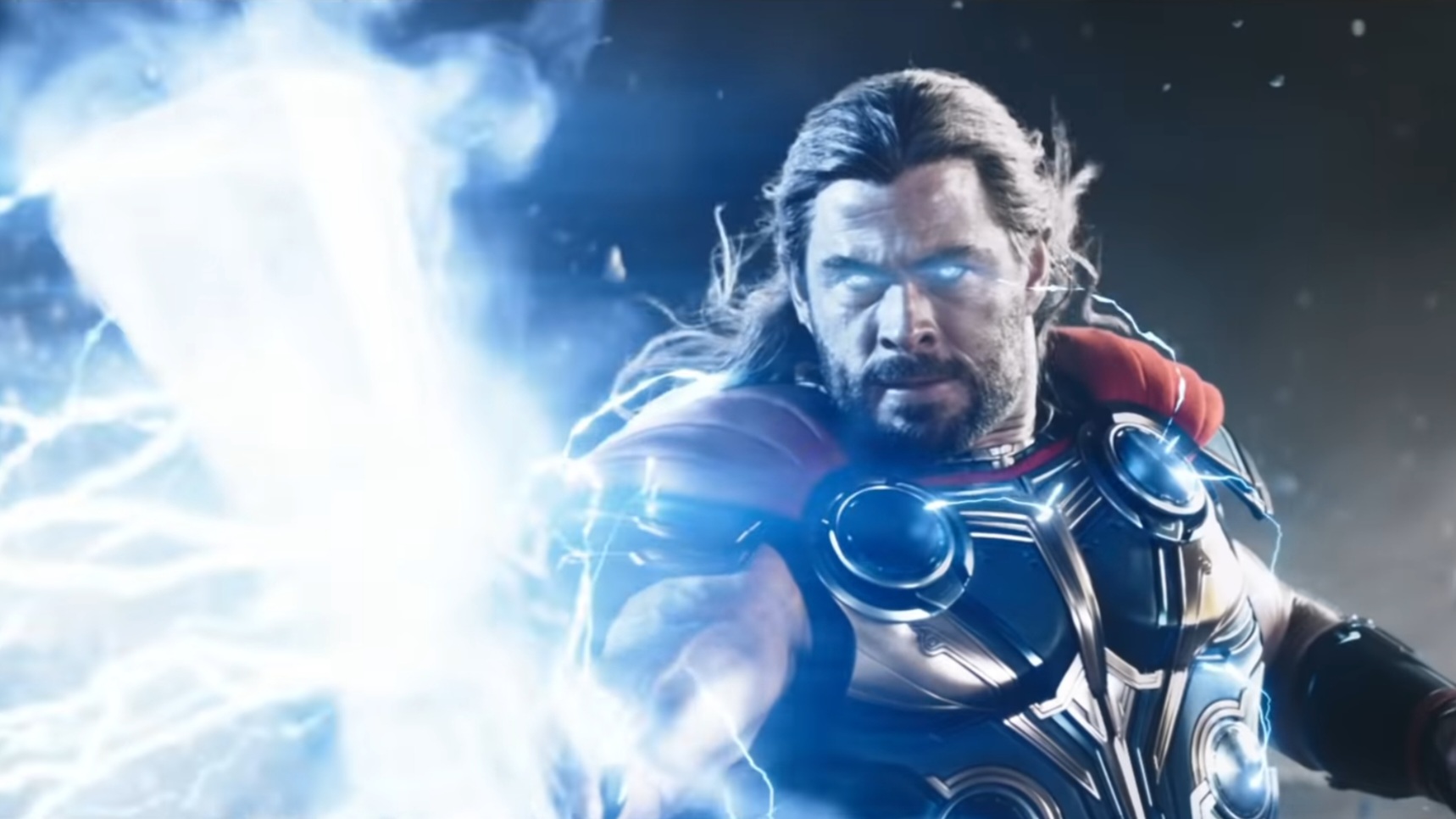 The comedy does punch up the scenes and it stops the movie from being a drag. Thor: Love and Thunder features some of the best comedy of Phase Four. While not on the same level as Thor: Ragnarok, the movie has a lot of punches that had me laughing out loud in my seat. One running joke for example saw two screaming goats, and whenever they were on screen, it had me in stitches.

However, the action feels very tame compared to how Taika portrayed Thor in his previous outing. Despite being infused with a soundtrack featuring Guns N’Roses, the action just didn’t have any impact and felt very mundane. In fact, it makes that Led Zeppelin bridge scene from Thor: Ragnarok all the more baffling considering they are directed by the same person. 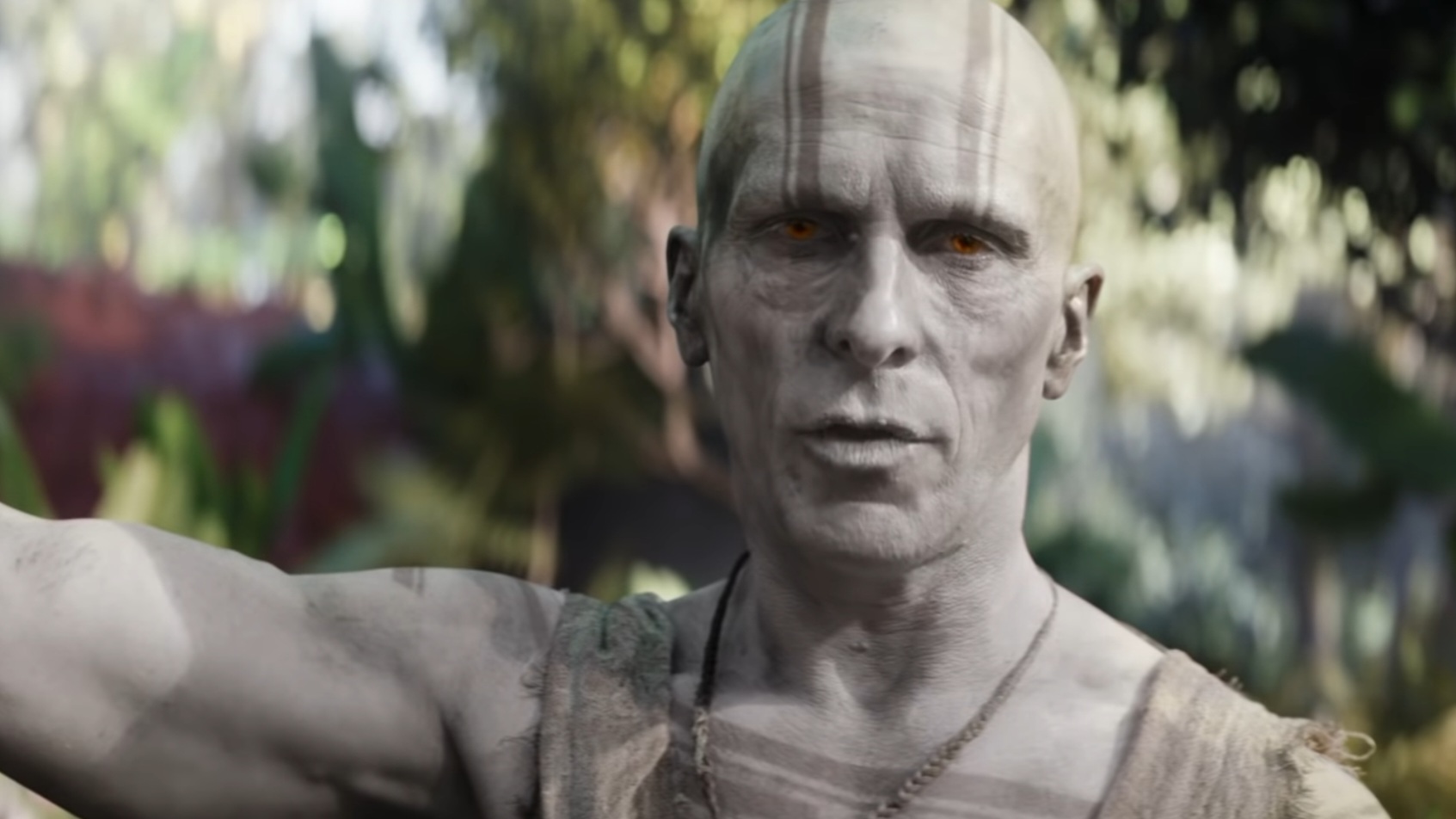 Thor: Love and Thunder also moves at an extreme break-neck speed, and it just doesn’t let moments breathe out. By the third act, I honestly felt only an hour of the film had passed just to notice that “oh, the movie is about to end.” It created such a whiplash of an experience that I couldn’t process anything. With the visuals too feeling like a bunch of actors just standing in front of a green screen (which is weird considering they shot using LED volumes), I questioned if I was watching a parody of Spy Kids right now.

When embracing its camp, Thor: Love and Thunder does great. The first act in general was genuinely good, but then slowly as the runtime seemed to crumble upon itself, the cracks started showing. It reminded me of the Joel Schumacher's Batman films in many ways, and I wasn’t sure if that was the intended effect. Doctor Strange in the Multiverse of Madness Movie Review: Benedict Cumberbatch’s Marvel Film Revels in Sam Raimi’s Horror Vibes and Elizabeth Olsen’s Scarlet Witch Act (LatestLY Exclusive). 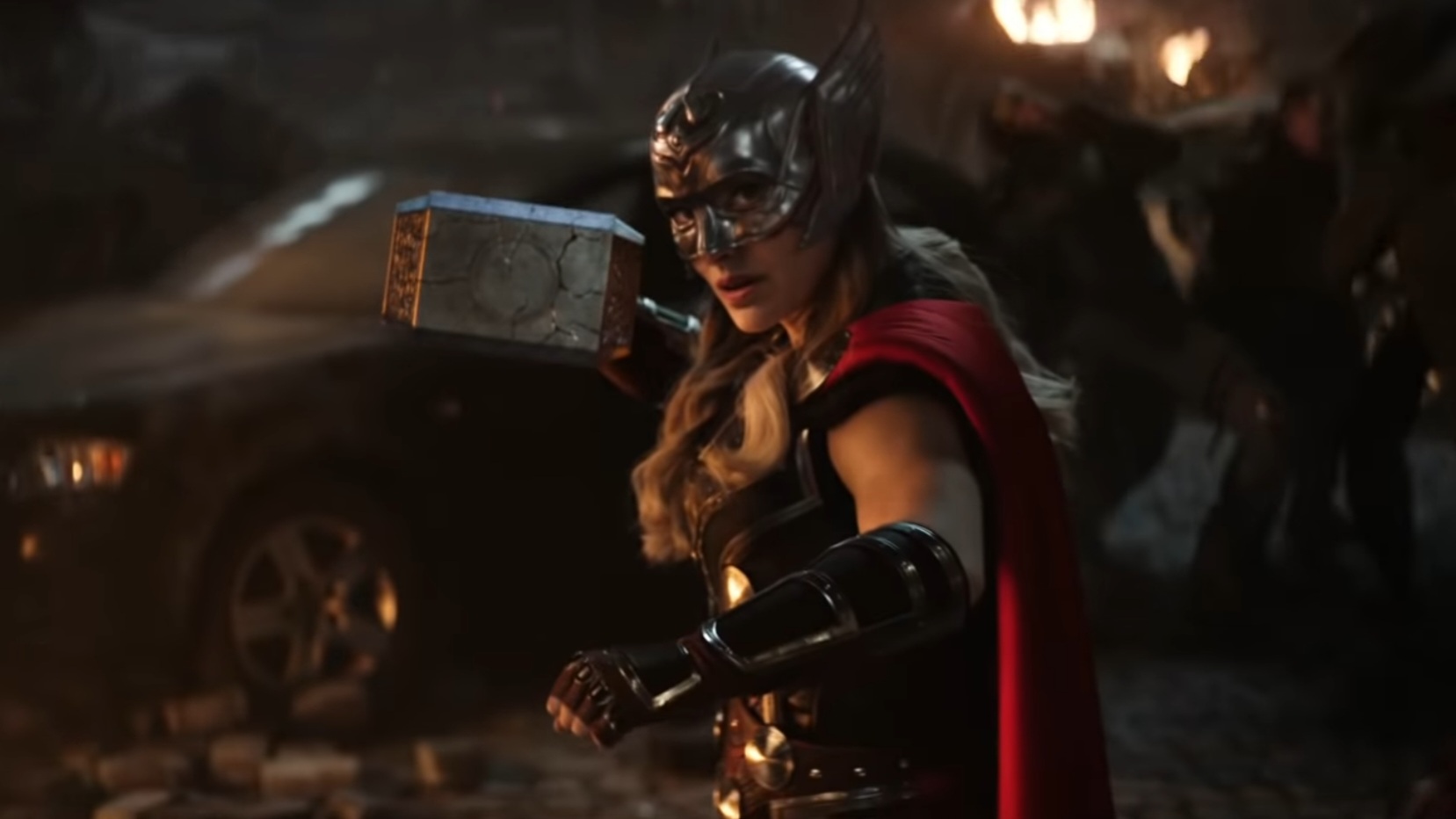 Even Michael Giacchino’s original score just seemed to fade away in the background. Guns N’Roses blasting every other scene made for no impact (hence proving, once and for all, that Led Zeppelin is the greatest band of all time). It’s just an underwhelming experience considering all the talent that was attached over here.

(The above story first appeared on LatestLY on Jul 07, 2022 12:54 AM IST. For more news and updates on politics, world, sports, entertainment and lifestyle, log on to our website latestly.com).