Released in 1993, Jurassic Park changed cinema forever. Not only did it advance visual effects, it also made Dino’s into the huge pop-culture trend they are today. On a personal note, even started my obsession with them, but nonetheless, it was a huge deal. 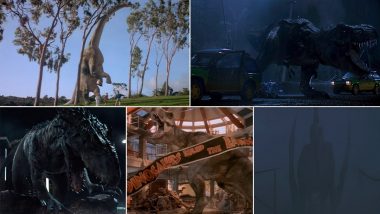 It's World Dinosaur Day today, and we take this day to celebrate the creatures that roamed our little plant a few million years ago. In this day and age, who doesn’t love dinosaurs? These pre-historic creatures have become iconic in their own right. Even in pop-culture, they have influenced and added so much to our media, to the point we have gotten so many great movies and franchises out of it. One franchise though that triumphs it all and that made dinosaurs into the iconic creatures that they are today, it that of Jurassic Park. Jurassic World Dominion Featurrette: Sam Neill, Laura Dern and More Relive the Legacy in This New Promo For Chris Pratt's Dinosaur Film! (Watch Video).

Released in 1993, Jurassic Park changed cinema forever. Not only did it advance visual effects, it also made Dino’s into the huge pop-culture trend they are today. On a personal note, even started my obsession with them, but nonetheless, it was a huge deal. While not entirely scientifically accurate, the franchise has spawned five films, with the sixth and final one on the way, Jurassic World: Dominion. So, until we wait for the grand finale of the franchise, let’s take a look at 10 of the best dino scenes from the films and celebrate World Dinosaur Day. Jurassic World Dominion Trailer 2: Chris Pratt, Jeff Goldblum, Sam Neill Are on Their Way to Take Baby Raptor Home (Watch Video).

The Spinosaurus from Jurassic Park III occasionally gets a bad rep online, because it took down a T-Rex, and fans weren’t particularly over the moon about it. But, before we got to that point, it did make an impressive entrance that led to one of the more memorable scenes in the film.

Indominus Rex Gets Out (Jurassic World)

One of the biggest marketing points about Jurassic World was the inclusion of a hybrid dinosaur called Indominus Rex. A bigger, badder and a meaner dinosaur, it met all those expectations when it escapes its paddock in the movie.

The Raptors in the first film were built up to be the smartest apex-predator the world had ever seen, but they still got outsmarted by two kids in a kitchen, that will forever be iconic. Considering just how tense the scene got, this was one of the moments in the film that would have you on the edge of your seat.

The film features another great scene that is built up to perfection. Our group here, enters an environment that’s shrouded with fog. Slowly they find out that it’s a cage for Pteranodons and so begins the chaos.

For all its misfires, The Lost World: Jurassic Park still gave us many iconic moments. After a chase with the T-Rex, the InGen group finds themselves surrounded in a field with some very tall grass. The scene is built up with us seeing the tail of the Raptors emerging from the grass and them picking off men one-by-one.

The opening for Jurassic World: Fallen Kingdom was by far the best part about the film. Featuring a mercenary group arrive on the island of Isla Nublar, they try extracting the DNA of the Indominus Rex that still lies in the Mosasaurus paddock. After a brief tussle with the T-Rex and a huge Mosasaurus reveal, this is how you open a film.

How do you make a kickass finale? With a bunch of teeth and two dinosaurs fighting to the absolute death. Featuring the franchise mascot, the T-Rex, and the new blood Indominus Rex, this is a fight that will make your inner Dino nerd very happy.

The original T-Rex reveal from Jurassic Park is still a masterclass in how a movie monster should be introduced. It’s a constant build up that is filled with some very tense sequences that puts our characters in many uncomfortable positions. Not to mention, first time seeing that giant come out and just ragdoll a car was a thing of many children’s nightmares.

After the scene in the kitchen, our entire group is finally reunited, and we get another iconic chase. After the raptors have surrounded the group from all the four sides, the T-Rex finally comes in to save the day, and leaves us with one of cinemas most iconic shots.

When watching Jurassic Park, you were constantly waiting for that wow factor, and when it did hit, oh boy, did it hit. Featuring Sam Neill’s Alan Grant geek out over looking at a Brachiosaurus in flesh is what cinema experiences are made for. Seeing this giant looking as real as possible back in the day, is many cinephiles’ favourite movie memory to this day.

(The above story first appeared on LatestLY on Jun 01, 2022 05:45 PM IST. For more news and updates on politics, world, sports, entertainment and lifestyle, log on to our website latestly.com).