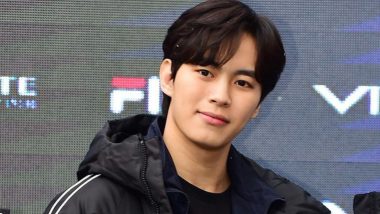 The biggest news for K-Pop fans is here. In a shocking announcement, Hongbin has announced his exit from VIXX. The band will now be a five-member group and Hongbin won't be a part of any further promotions. The official announcement came on August 7 through a press statement made by Jellyfish Entertainment. The press release mentioned how this sad news was going to leave their fans distressed but hope for them to continue their love and support towards the band. The reason of Hongbin's exit is as of now unknown. BTS To Make Their Performance Debut At VMAs 2020 With New Single 'Dynamite'.

For the uninitiated, VIXX is a South Korean boy band formed by Jellyfish Entertainment through the 2012 reality show MyDOL. The other members of the band include N, Leo, Ken, Ravi and Hyuk. Announcing the news of Hongbin's exit, Jelly Entertainment in their press release wrote, "We are sharing an official statement regarding VIXX member Hongbin. First, we express our sincere gratitude to fans who love VIXX a lot, and we are conveying sad news. On August 7, Hongbin shared his intention to withdraw from VIXX. After careful discussion with the VIXX members and Hongbin, we are respecting his wishes and so it’s been decided that he will leave the group."

Addressing the band's future plans after Hongbin's exit, the statement read, "It’s planned that VIXX will promote as a five-member group in the future. We are very sorry to fans for causing concern with this sudden news, and we ask you to continue to love and support the VIXX members."BTS' Jungkook Tests Negative After Visiting COVID-19 Hotspot In Itaewon, South Korea; Agency Issues Apology.

The band had recently made a comeback in 2019 after taking a break for a year. Prior to 2019 single titled "Parallel", the band's last full studio album, Eau de VIXX, was released in 2018.

(The above story first appeared on LatestLY on Aug 07, 2020 06:30 PM IST. For more news and updates on politics, world, sports, entertainment and lifestyle, log on to our website latestly.com).