Deepika Padukone and Salman Khan will be finally working together in a film and the actress has filmmaker Sanjay Leela Bhansali to thank. Read for more details... 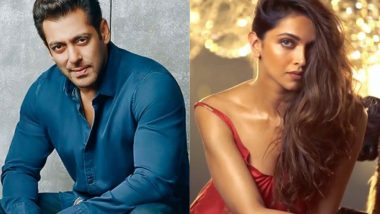 If all had gone well then Deepika Padukone would have debuted opposite Salman Khan and not Shah Rukh Khan in Om Shanti Om. Over a decade later, Deepika has still not worked with the Dabangg hero. Despite the actress declaring several times that she'd like to star opposite Salman in a movie. Buzz was that the actress was in the running for Ali Abbas Zafar's Sultan, but the role went to Anushka Sharma. There were also reports of how Kabir Khan had roped in Deepika for Tubelight and even promised to give the actress a meaty role. However, reports suggested that it was Salman who asked Kabir to rope in a Chinese actress instead of Deepika.

Insiders suggest that the reason Salman is not keen on working with Deepika is the actress' cold war with ex-girlfriend Katrina Kaif. Everybody knows that after her split with Ranbir Kapoor, Katrina started dating RK Jr. The Om Shanti Om actress even revealed in an interview that the reason for her break-up was that she had caught Ranbir red-handed. Love blossomed between Katrina and Ranbir on the sets of their film Ajab Prem Ki Ghazab Kahani.  While Kat's affair with Ranbir caused a lot of awkwardness, her friendship with Salman Khan continued. However, Deepika-Katrina's cold war became fodder for gossip columns.

Both the actresses did not directly take on each other, but never really spared an opportunity to take a sly dig at one another. Salman who's extremely protective about Katrina did not like Deepika's jibes at Katrina and hence refused to work with the Padmaavat actress.

This is a thing of past now, Katrina is no longer in a relationship with  Ranbir and Deepika recently married her boyfriend of six years Ranveer Singh. In fact, Katrina was one of the first celebrities to congratulate Deepika on social media. And guess that has also changed Salman's equation with Deepika. Recent buzz suggested that SK had offered Deepika a part in  the next installment of Tiger Zinda Hai . While Katrina will still be the leading lady, Ms Padukone will have an interesting appearance.

As if this rumour wasn't enough, reports now suggest that Deepika will work with Sanjay Leela Bhansali yet again in a period drama. This time however, her husband Ranveer Singh will not be a part of the film. Bhansali has roped in Salman and Shah Rukh for the two hero project and Deepika will be the only heroine. We bet that Deepika's commitment to SLB has earned her this privilege.

(The above story first appeared on LatestLY on Nov 24, 2018 09:50 AM IST. For more news and updates on politics, world, sports, entertainment and lifestyle, log on to our website latestly.com).