Acharya: Chiranjeevi Was the One Who Got SS Rajamouli’s Approval for Ram Charan’s Dates Despite the Busy RRR Schedule 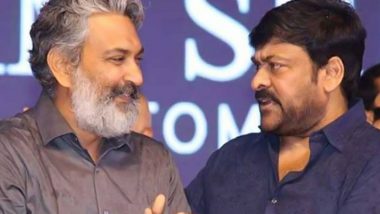 Following the phenomenal success of RRR, Ram Charan, who has begun promoting his upcoming release Acharya, revealed intriguing details about Koratala Siva's directorial. During a media conversation, Ram Charan discusses how despite having no dates due to his commitments with 'RRR', he found time to play a key role in 'Acharya'. Acharya: Mahesh Babu Lends His Voice For Chiranjeevi – Ram Charan’s Film.

In the same interview, Ram Charan and director Koratala Siva expressed concerns about arranging Charan's dates for 'Acharya.' "It's difficult to get the hero's dates when working with a huge director like Rajamouli," Koratala Siva explained. "When Koratala sir approached me for the dates to shoot for Acharya, we were both terrified of approaching Rajamouli," Ram Charan explained. Acharya: Ram Charan Talks About His Experience Shooting With His Father Chiranjeevi, Says He Cried When He Hugged Him Once.

It was megastar Chiranjeevi himself, who met Rajamouli and persuaded him to let Charan go for a few days so that he could finish 'Acharya', the duo (Ram Charan and Koratala Siva) conveyed. Ram Charan also reveals that it was his mother's wish to see both his father and him on-screen, and she was the one who convinced Chiranjeevi to cast him in Acharya. Acharya is slated for its release on April 29 and stars Kajal Aggarwal, and Pooja Hegde as the female leads opposite Chiranjeevi and Ram Charan, respectively.

(The above story first appeared on LatestLY on Apr 21, 2022 01:38 PM IST. For more news and updates on politics, world, sports, entertainment and lifestyle, log on to our website latestly.com).