Director H Vinoth and the makers have decided not to keep the fans in suspense any longer and have revealed the name of Ajith Kumar's 61st film, Thunivu. The film has only one more schedule of shooting left, after which Ajith will to move on to his next project. 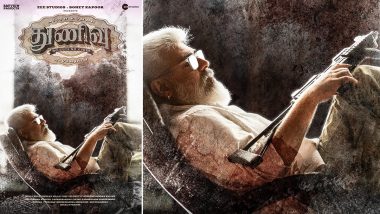 Ajith Kumar's upcoming action thriller, which is being directed by H. Vinoth and was tentatively called AK61, has been titled Thunivu, its makers announced on Wednesday. The first look poster of the film, which also had the title of the film on it, has Ajith relaxing on a chair with a semi-automatic weapon in his hand. The title has the tagline, 'No Guts, No Glory'. Thunivu - No Guts No Glory: Ajith Kumar's 61st Film, Directed By H Vinoth, Gets A Title and Its First Look Poster.

The film, which is a Boney Kapoor production (just like Valimai, another Ajith Kumar-Vinoth collaboration), has a plot that revolves around a bank heist. Interestingly, the unit had erected a giant set resembling Chennai's popular landmark Mount Road in Hyderabad where certain important scenes of the film were shot in its previous schedules.

Just one more schedule of shooting is left. After the last schedule, Ajith is expected to move on to his next project, which is to be directed by Vignesh Shivan. Manju Warrier Thanks Ajith Kumar and Adventure Riders India for Inviting Her on Their Two-Wheeler Tour.

(The above story first appeared on LatestLY on Sep 21, 2022 10:56 PM IST. For more news and updates on politics, world, sports, entertainment and lifestyle, log on to our website latestly.com).