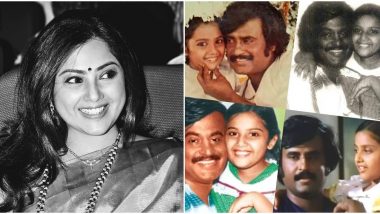 Superstar Rajinikanth and Meena are all set to share screen space in the upcoming film Annaatthe. It is after more than two decades that these two actors would be working with each other all over again. Meena had first worked with the superstar of Indian Cinema as a child artist. Meena had started her acting career in 1982 and two years later she worked with Thalaiva in the film Anbulla Rajinikanth. It has been more than 36 years since the film has been released and Meena took to Instagram to share some fond memories of working with Rajinikanth. Thalaivar 168 Cast: Meena, Keerthy Suresh, Khushbu Join Rajinikanth Starrer; View Pics from Puja Ceremony.

Meena, one of the most popular actresses of South Indian Cinema, shared a collage of pictures featuring her a child with Rajinikanth. She wrote, “36 years of Anbulla Rajnikanth Thank you Thooyavan (late producer) sir who came with a character and movie which no child artist could refuse knatrajdr who molded and made Rosy a heart touching character and last but not least @rajinikanth who was supportive and encouraging throughout the movie Special thanks to @official.latha.rajinikanth @latharajinikanth who sang the title song Kadavul Ullamey for the movie. Miss your singing amma.” Annaatthe: Superstar Rajinikanth’s Film Is All Set for Pongal 2021 Release.

Talking about Annaatthe, the movie is directed by Siva and it also features Keerthy Suresh, Khushbu, Nayanthara, Prakash Raj, Soori, Vela Ramamoorthy and Sathish. The film is produced under the banner of Sun Pictures.

(The above story first appeared on LatestLY on Aug 03, 2020 09:49 AM IST. For more news and updates on politics, world, sports, entertainment and lifestyle, log on to our website latestly.com).