Annaatthe: Rajinikanth Praises Film’s Director Siva for the Recent Release, Says ‘He Had Delivered a Hit Just as He Promised He Would’

Rajinikanth then says he asked Siva how he was so confident about delivering a hit. To this, Rajini says Siva pointed out two factors. "One, you must be in a film with a good story and two, you must play a village character as it has been a long time since you have done such a role." 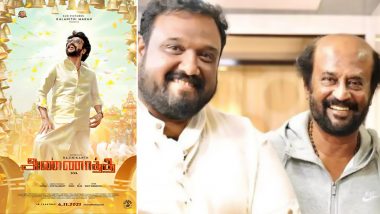 Stating that his recently released 'Annaatthe' was a film that he could not forget in his life, megastar Rajinikanth on Monday showered praises on the film's director Siva, saying he had delivered a hit just as he promised he would. The actor put out two voice messages on Hoote, an app launched by his daughter Soundarya Rajinikanth, in which he spoke at length about how the decision to make 'Annaatthe' was taken. Annaatthe: Rajinikanth’s Film Censored With U/A Certificate.

Stating that he was mighty impressed with Siva's earlier film 'Viswasam', which released on the same day that his 'Petta' released, Rajini says he expressed a desire to meet and congratulate director Siva to 'Viswasam' producer Thyagarajan. "Siva came home to meet me and I really liked him. He was like a child as there was truth in every word that he said," the superstar recalls. Annaatthe: Superstar Rajinikanth Remembers Late SP Balasubrahmanyam After His First Single ‘Annaatthe Annaatthe’ Releases From the Film.

When the topic of doing a film together came up, Rajini says he pointed out that doing a film was not important but delivering a hit was. To this, Rajini says Siva told him, "Giving you a hit is easy sir." Admitting that Siva's reply took him by surprise completely, Rajini says, "Nobody has said that to me so far. People usually tell me, 'We can make it a hit sir or we can try sir.' There has never been a director who has told me that giving me a hit is easy." Rajinikanth then says he asked Siva how he was so confident about delivering a hit. To this, Rajini says Siva pointed out two factors. "One, you must be in a film with a good story and two, you must play a village character as it has been a long time since you have done such a role."

"If we have both these, it will be enough," Rajini recalls Siva as telling him. "I really liked the way he said it. I told him to come back with a good story. In 20 days time, he called me and said he had a story and would want to give me a narration. I asked him to come over and he said it would take two and a half hours. I agreed," the actor says. The superstar admitted that he was moved when Siva began narrating the story.

"I had tears in my eyes without my knowledge by the time Siva was narrating the climax," he said and added, "I shook Siva's hands and said, 'Super. You must make a film exactly the way you have narrated.' To this, Siva replied, 'I will make it better than this. You will see that hordes of people will come to watch the film sir. I will make a film like that.'" "Just like what he said he would do, he has done. This film is a big success. There were a lot of problems while making the film but Siva faced all of them with a smile," Rajini pointed out before signing off.

(The above story first appeared on LatestLY on Nov 15, 2021 06:54 PM IST. For more news and updates on politics, world, sports, entertainment and lifestyle, log on to our website latestly.com).