Tovino Thomas’ new film titled Anveshippin Kandethum has been announced and the makers have even shared the first look poster of it. 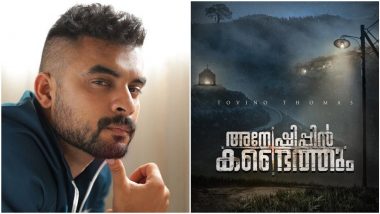 Tovino Thomas is one of the finest actors of Malayalam Cinema and today he celebrates his 32nd birthday. From fans to industry friends, all have been extending heartfelt birthday wishes to this talented star. But the day has become special for all his fans as well with the announcement of his new Malayalam film. Tovino Thomas’ new film titled Anveshippin Kandethum has been announced and the makers have even shared the first look poster of it. Tovino Thomas Birthday: 7 Pictures That Prove He Is a Doting Father to His Daughter Izza and Son Tahaan (View Pics).

The first look poster of Anveshippin Kandethum does not reveal Tovino Thomas’ look in it but it does share many other key details. Helmed by Darwin Kuriakose, the title of the film means ‘keeping searching and you’ll find’ . The script is written by Jinu V Abraham, who had made his debut with the film Masters as a screenplay writer. He has also penned the script for Prithviraj Sukumaran’s upcoming film Kaduva. Santhosh Narayanan has been roped in as the film’s music composer. Minnal Murali: Hrithik Roshan Shares Teaser of Tovino Thomas' Superhero Film.

The first look poster of Anveshippin Kandethum shows cardinal directions (N,S,E and W) that’s running through the film’s title. The text of the title has dropped hints of several years such as 1968, 1994 and also has mentioning of few reports. The backdrop of the poster features a church with its basement lit up, the road is covered with dense fog and on one side of it minimal residents are shown, the mountain highlights a tall tree and it shows the body of person hanging from it. Anveshippin Kandethum looks like a suspense thriller and we just cannot wait to know about Tovino Thomas’ role and more other details of this film.

(The above story first appeared on LatestLY on Jan 21, 2021 11:47 AM IST. For more news and updates on politics, world, sports, entertainment and lifestyle, log on to our website latestly.com).