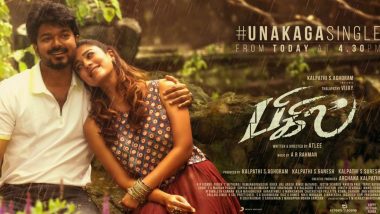 Here’s another treat for Thalapathy Vijay and Nayanthara fans during a weekday! The director of Bigil, Atlee, has announced that they would be releasing the third single titled “Unakaga”, an AR Rahman melody. The song, which is releasing today, will feature the film’s lead pair – Vijay and Nayanthara. Atlee tweeted, “#Bigil #UNAKAGA @arrahman sir melody  My favourite one from today 4:30 @Ags_production @archanakalpathi @actorvijay back with my darling #Nayanthara”. Thalapathy Vijay’s Song Verithanam from Bigil Hits 1 Million Likes on YouTube, Fans Trend #VerithanamHitsRecord1MLikes.

The makers of Bigil have also released a teaser poster of “Unakaga” and it clearly shows that it is going to be a romantic number. It is after a long, long time that we’d get to watch Vijay and Nayanthara sharing screen space, and we just cannot wait for this number. The two have earlier worked together in Sivkasi and Villu that released in 2005 and 2009, respectively.

This is the third time that Vijay and Atlee have collaborated for a project after the blockbuster films, Theri and Mersal. Touted as a sports drama, Vijay would be seen playing dual roles – as a gangster and the coach of a football team. Anal Arasu who have choreographed action sequences for movies like Vedi, Rowdy Rathore, Kaththi, I, has also choreographed for Bigil. The film also features Vivek, Kathir, Jackie Shroff, Anandraj, among others in key roles. Bigil is all set to hit the screens during the time of Diwali 2019. Stay tuned for more updates from the glamorous world of showbiz.

(The above story first appeared on LatestLY on Sep 18, 2019 02:17 PM IST. For more news and updates on politics, world, sports, entertainment and lifestyle, log on to our website latestly.com).