Lijo Jose Pellissery is best known for his movies like Amen,A ngamaly Diaries and Ee. Ma. Yau. Now, he brings Churuli for fans! 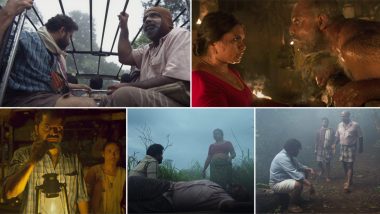 Lijo Jose Pellissery directed Malayalam film, Churuli trailer was dropped on the internet on Wednesday. After hinting to the fans about a 'surprise', the trailer of the film is here. It looks like a thriller that is set into a dense jungle in a village. There is no clarity on the story but there is mystery involved that has to be unearthed by a bunch of people. Jallikkattu Director Lijo Jose Pellissery Announces His Next Film! (View Post).

The trailer has a narration by a lady who tells a tale of an old phantom who stays in this beautiful but mysterious forest. She tells about an old brahmin guy who once set out in search of this creature and who is still apparently seen through appearances in this forest. People are seen walking through the forest with utmost caution and fear. There are many scenes shot at night that give the perfect eerie effect. Not to forget the background music that adds to it. Check out the trailer below.

Lijo Jose Pellissery, who is also known for his movies like Amen,Angamaly Diaries and Ee. Ma. Yau; shared an intriguing poster of this movie as well. All the portions of this film were reportedly shot before the lockdown began. The trailer shows the film as A rated one.

(The above story first appeared on LatestLY on Jul 01, 2020 07:17 PM IST. For more news and updates on politics, world, sports, entertainment and lifestyle, log on to our website latestly.com).