Dev Mohan to Make His Acting Debut with Sufiyum Sujatayum! Actor Spills Beans About His Role in This Jayasurya – Aditi Rao Hydari Starrer 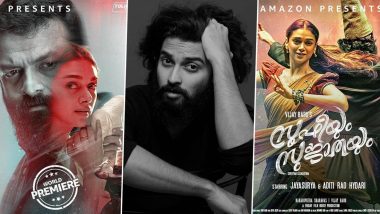 Sufiyum Sujatayum is the upcoming Malayalam musical drama, featuring Jayasurya and Aditi Rao Hydari in the lead roles. When the makers had dropped the trailer of this upcoming flick online, one could not stop praising the chemistry of the lead actress opposite debutant Dev Mohan, who plays the role of a Sufi saint in this movie. The trailer dropped the hint that Sufiyum Sujatayum is a classic love tale of inter-faith lovers, but destiny had something else in store for them. In an interview with The Hindu, Dev Mohan shared how difficult it was for him to remain tight-lipped about his acting debut. He also spilled beans about his role and even expressed his views about Sufiyum Sujatayum hitting the OTT platform. Sufiyum Sujatayum Trailer: Jayasurya and Aditi Rao Hydari’s Musical Love Story Is a Classic Tale of Inter-Faith Lovers (Watch Video).

Dev Mohan, who is excited about his acting debut, revealed how he had to keep it a secret for almost about two years and how his loved ones were taken by surprise when the trailer of Sufiyum Sujatayum hit the internet. He was quoted as saying, “Most of my colleagues and friends wondered why I was growing my beard and hair. So, when the trailer of the film released on June 24, they were in for a surprise. Some of them watched it twice to make sure it was me!” Aditi Rao Hydari Returns to Malayalam Cinema After 14 Years With Sufiyum Sujatayum.

Dev Mohan, who is a mechanical engineer and has no connections in the film industry, shared how he managed to bag this amazing role in the film directed by Naranipuzha Shanavas. He stated, “I didn’t know how to go about it and was not confident enough to do theatre as well. Also, my family has no connection with the film industry. Even though I decided to learn acting, that didn’t go beyond a three-day workshop because I couldn’t keep away from my job for long.” He also revealed that when there was a casting call for this Malayalam movie, he instantly applied for the same.

Gearing Up For The Debut Film

The handsome hunk shared how he mastered the Sufi whirling. About it Dev Mohan further mentioned, “It’s like meditation and so had to look organic. The process wasn’t easy. Initially, I used to feel dizzy and nauseated and had splitting headaches. It took nearly nine months for me to learn it.” And about his debut film hitting the OTT platform he said, “It’s disappointing that there aren’t posters of my first movie. But this is the best option at the time of this pandemic. Otherwise, I might have had to wait even longer to see myself on screen for the first time.”

Sufiyum Sujatayum is the first Malayalam film to get a direct web release. Produced by Vijay Babu under Friday Film House banner, it will be premiered on Amazon Prime Video On July 3.

(The above story first appeared on LatestLY on Jul 01, 2020 01:17 PM IST. For more news and updates on politics, world, sports, entertainment and lifestyle, log on to our website latestly.com).