Hariharan, the veteran filmmaker, has won the prestigious JC Daniel Award for the year 2019, for his ‘outstanding contribution to Malayalam Cinema’. 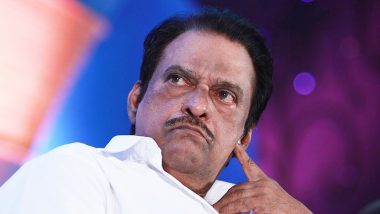 Hariharan, the veteran filmmaker, has won the prestigious JC Daniel Award for the year 2019, for his ‘outstanding contribution to Malayalam Cinema’. This award is Kerala government’s highest honour and is presented annually by Kerala State Chalachitra Academy. The recipients for this award are selected by independent jury established by the Academy and the Department of Cultural Affairs. This honour is named after JC Daniel, regarded as the father of Malayalam cinema, who made the first silent movie in Malayalam. Kerala Film State Awards 2020: Suraj Venjaramood, Kani Kusruti, Fahadh Faasil Win Big (View Full Winners List).

AK Balan, Cultural Affairs Minister, stated in a release that this award carries a prize of Rs 5 lakh, a plaque along with a citation, reports PTI. Director Hariharan was chosen by a jury chaired by writer MT Vasudevan Nair, director Harikumar, actor Madhubala, Kerala State Chalachitra Academy Chairman Kamal and Culture Department Secretary Rani George as members. The other celebs who have won this prestigious award in the previous years include veteran actor Sheela, director Adoor Gopalakrishnan, lyricist Sreekumaran Thampi, KG George, IV Sasi, among others.

Director Hariharan is also a recipient of National Film Awards and six State Awards as well. He has helmed around 50 movies and most of his films revolved around the cultural and relational aspects of a typical Keralite society. Some of his notable works include Oru Vadakkan Veeragatha, Panchagni, Nakhakshathangal, Amrtham Gamaya, Parinayam, Pazhassi Raja, Sargam, among others.

(The above story first appeared on LatestLY on Nov 04, 2020 09:24 AM IST. For more news and updates on politics, world, sports, entertainment and lifestyle, log on to our website latestly.com).