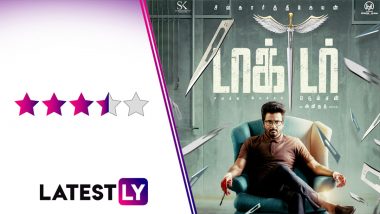 Doctor Movie Review: By the time this review goes online, Doctor, directed by Nelson Dilipkumar. has already made a Rs 100 crore at the box office globally. The film is a certified hit, and now it has made to OTT platforms like Netflix and SunNXT, where it has gained more traction. But big hits don't really mean good movies, though in the case of Doctor, there is hardly anything to worry about. Sivakarthikeyan's film, albeit some very glaring tonal shifts, deserves to be a certified blockbuster. Doctor Review: Sivakarthikeyan’s Film on Organ Trafficking Gets Tagged As Blockbuster by Netizens!

Sivakarthikeyan plays Varun, a military doctor, who belongs to the same mould as Sheldon Cooper from The Big Bang Theory. He is a brilliant surgeon and a skilled army-man, but isn't very good at handling human emotions. Which is why his fiancee Padmini (Priyanka Mohan) breaks up their engagement. However, on that very same day, Padmini's teenage niece Chinnu goes missing from school. While the family is desperate in seeking her whereabouts, Varun comes to their rescue, trying to find the girl using his idiosyncratic methods.

Sivakarthikeyan films are always an entertaining bunch, taking on social issues but treating them in a fun manner that appeals to most of the audience. In Doctor, it is the crime of human trafficking that takes the centre-stage, the treatment for the film isn't heavy-handed, contrary to what the subject demands. Nelson Dilipkumar, whose debut Kolamavu Kokila was also a fun watch, gets a perfect foil in Sivakarthikeyan's talents to create an entertainer that can be enjoyed by all.

Though, I have to say, the opening act was quite shaky. Loved that engagement breakup scene, where Padmini's reason for rejecting Varun made quite the sense, while also establishing the equations of these her family with Varun well. But when Chinnu gets kidnapped, the added humour, especially surrounding Redin Kingsley's character, felt out-of-place, as we never to get to feel the family's pain and fears. And since I am seeing Doctor after the terrific Jai Bhim, the comic treatment of the scenes where the cops are beating up usual suspects felt awkward. Jai Bhim Movie Review: Suriya Puts His Best Foot Forward in This Powerful and Increasingly Relevant Legal Drama.

Once I got set with the tone, though, Doctor turned out to be a jovial ride. Varun using the bereaved family in his crazy (and illegal) plan to find out the men responsible for the trafficking lacks intellect if you really think about it but doesn't come across as such, and that's a major win for the film. With Yogi Babu's character getting in the mix, the mirth hits the ceiling. There are some very fun crafted sequences that are quite the highlight. Like, Varun's plan to subdue the gangster twins Alvin-Melvin (Raghu Ram and Rajiv Laxman) on a metro train and using night goggles was hilarious (even if you have to suspend your sense of disbelief).

Doctor continues to keep up its tempo when the action shifts to Goa and we get to meet the main antagonist in Vinay Rai's Terry. While I won't say much to not spoil for those who haven't seen the film, the sequences that pan out in these portions have plenty of surprises in them, while not losing out on the humour. Logic is never the priority here, but the director makes sure that you don't think way too much about how Varun and gang pull off the near impossible without the help of the authorities.

Nelson has also used the cast really well, though, like always, Yogi Babu emerges a scene-stealer. The sequence where the hero team are put on stakes to be burnt near the climax is a highlight among the actor's scenes in the film. Sivakarthikeyan is fantastic in the lead role, doing justice to the quirkiness needed for his character, while not making it over-heroic. It is a nice blend of mass and class here. Priyanka Mohan is pretty and confident, though I wish her character had retained the head-strength that she displayed earlier in the film. To be fair, she is right in not accepting a partner who isn't emotive to her needs. Vinay Rai, who was so good in Thupparivaalan, aces his suave, menacing act. Anirudh Ravichander's music is perfectly heady, with the "Chellamma" song already declared the track of 2021 by fans.

- A Fun Entertainer With Some Nice Surprises and Entertaining Performances

- Length and a Shaky First Act

Sivakarthikeyan and Nelson Dilipkumar turn in a winning film, that has the right dose of thrills, humour and action, even if the narrative is logic-defying stubborn. Doctor is streaming on Netflix.

(The above story first appeared on LatestLY on Nov 05, 2021 06:19 PM IST. For more news and updates on politics, world, sports, entertainment and lifestyle, log on to our website latestly.com).