Sumana Kittur is a popular filmmaker in the Kannada film industry. She is known to be one of the most experimental directors of Sandalwood. 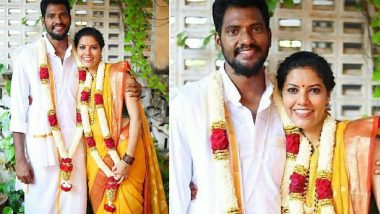 Sumana Kittur is a popular filmmaker in the Kannada film industry. She is known to be one of the most experimental directors of Sandalwood. The films that she has directed include Slum Bala, Kallara Santhe, Edegarike and Kiragoorina Gayyaligalu. As per a report in TOI, this popular filmmaker has tied the knot with her longtime beau Srinivas during this lockdown period. Pics from her wedding ceremony have already taken the internet by storm. Tollywood Producer Dil Raju Ties The Knot Amid Coronavirus Lockdown, Wedding Pics Go Viral.

There are many directors and actors, across film industries, who have got hitched in a low-key affair during this lockdown period. Director Dil Raju, Nikhil Siddhartha, Chemban Vinod Jose, Manikandan Achari and many other actors have gotten married during the lockdown period. Talking about Sumana Kittur’s husband Srinivas, he is a software engineer and photographer. The report further states that the couple was in a relationship since quite a long time. Sumana and Srinivas reportedly wanted to get married at a temple in Karnataka but due to the lockdown imposed across the country, the couple decided to tie the knot in a simple ceremony in Puducherry. Malayalam Actor Manikandan Achari Gets Married to Anjali Amid Lockdown (View Pic).

As per a report in India Today, Sumana Kittur and Srinivas got married on April 17 and had kept about their wedding details under wraps. But the pictures from their low-key affair made its way to the internet, leaving the filmmaker’s fans amazed. The report also mentions that couple would be shifting to Bengaluru once the lockdown is lifted.

(The above story first appeared on LatestLY on May 25, 2020 12:46 PM IST. For more news and updates on politics, world, sports, entertainment and lifestyle, log on to our website latestly.com).