Etharkkum Thunindhavan, starring Suriya in the lead, hit the big screens today. The film written and directed by Pandiraj has reportedly been leaked online. 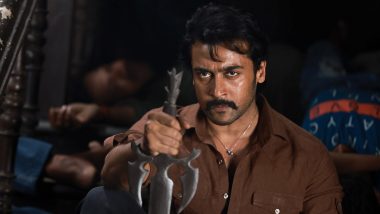 It’s after a long gap that fans of Suriya have got to watch him on the big screen. Owing to the pandemic, the actor’s films were been released on OTT platforms. And finally, Etharkkum Thunindhavan hit the big screens today and it has received positive reviews from the audience. Written and directed by Pandiraj, the film has been showered praises for the fine performances from the star cast, gripping narrative, thrilling music and kickass action sequences. Not just that, the film has delivered a strong social message, as per the audience. However, Etharkkum Thunindhavan or ET, has been leaked online. Suriya’s film, produced under the banner of Sun Pictures, has reportedly become victim of online piracy. Etharkkum Thunindhavan Movie Review: Netizens Hail Suriya – Pandiraj’s Action Thriller As A Mass Entertainer On Twitter!

Despite issuing several warnings, these sites leak newly released movies on their websites. Etharkkum Thunindhavan full movie in HD has been leaked on the torrent sites such as Filmywap, Onlinemoviewatches, 123movies, 123movierulz, Filmyzilla, and other pirated versions of the series in HD (300MB free download in 1080p, 720p, HD online) are available for the audience to watch.

Apart from Etharkkum Thunindhavan, there are several other movies and series that have too become the victims of online piracy. It includes the recently released Naradan, Bheeshma Parvam, Love Hostel, Gangubai Kathiawadi among others that have also been leaked online and made available in HD prints.

(The above story first appeared on LatestLY on Mar 10, 2022 12:41 PM IST. For more news and updates on politics, world, sports, entertainment and lifestyle, log on to our website latestly.com).