Good Luck Sakhi: Teaser Of Keerthy Suresh's Upcoming Film, A Nagesh Kukunoor Directorial, To Be Out On Independence Day 2020!

Fan of national award-winning actress Keerthy Suresh? As the teaser of Good Luck Sakhi to be out on the auspicious occasion of Independence Day 2020. Read on. 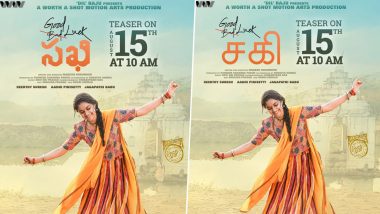 Fan of national award-winning actress Keerthy Suresh? Well, then we are sure that the latest update surrounding her upcoming film Good Luck Sakhi will excite you and how. As the actress took to her social media and announced that the teaser of her next will be out on the auspicious occasion of Independence Day 2020. Along with this, the South star also shared a poster of her flick which sees her in a desi attire lost in her own world dancing amid a village setup. Her film is said to release in Telugu, Tamil, and Malayalam languages. Miss India: Is Keerthy Suresh’s Character Name Manasa in the Film?

From the time, Keeerthy's Good Luck Sakhi was announced by the makers, fans have been waiting with bated breathe for the teaser of the film to be out soon. And August 15, 2020, at 10 am is the D-day. Well, after looking at the poster, we bet fans of the diva could not keep calm. Reportedly, the movie is a sports romcom wherein the actress is said to play the role of a shooter. Interesting, right? Sarkaru Vaari Paata: Keerthy Suresh Answers the Million-Dollar Question, Confirms Signing Mahesh Babu's Next.

Helmed by Nagesh Kukunoor Good Luck Sakhi also stars Jagapathi Babu and Aadhi Pinisetty in prominent roles. The movie is produced by Dil Raju and will have music by Devi Sri Prasad. It was in April 2019 when the first schedule of the film had kickstarted in Hyderabad. Also, the film is extensively shot in Vikarabad and Pune. Stay tuned!

(The above story first appeared on LatestLY on Aug 14, 2020 02:42 PM IST. For more news and updates on politics, world, sports, entertainment and lifestyle, log on to our website latestly.com).