Vineeth Sreenivasan, a multi-talented star of Malayalam cinema, is all set to win audiences’ hearts once again with his next directorial work, Hridayam. His fifth directorial project will feature Mollywood superstar Mohanlal’s son Pranav, Kalyani Priyadarshan and Darshana Rajendran. 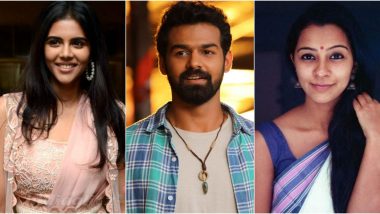 Vineeth Sreenivasan, a multi-talented star of Malayalam cinema, is all set to win audiences’ hearts once again with his next directorial work, Hridayam. The 34-year-old has directed films such as Malarvaadi Arts Club, Thattathin Marayathu, Thira and Jacobinte Swargarajyam. His fifth directorial project will feature Mollywood superstar Mohanlal’s son Pranav, Kalyani Priyadarshan and Darshana Rajendran in the lead. The announcement on this upcoming film was made on December 2 and since then fans have been excited. Hero Teaser: Sivakarthikeyan, Kalyani Priyadarshan, Abhay Deol, Arjun Sarja’s Action Thriller Looks Like a Mass Entertainer (Watch Video).

Superstar Mohanlal shared a video across social media platforms to announce about the upcoming Malayalam film Hridayam. He lent his voice as a narrator for this announcement video. Hridayam, which is also written by Vineeth Sreenivasan, will be produced under the banner of Merryland Cinemas. It is after a gap of three decades a film is produced under this banner. Hridayam is produced by Visakh Subramaniam and co-produced by Noble Babu Thomas, and it is slated to hit the screens in Onam 2020. Picture of Ajith on the Sets of Mohanlal’s Marakkar Takes the Internet by Storm.

Watch The Video Shared By Mohanlal On Hridayam:

Ace filmmaker Priyadarshan’s daughter Kalyani calls this project as a special one. While announcing about it she shared a note that read, “Dad once told me that the best part about this job is that you can wake up and never known who might call you that day. I understood what he meant only when I got the call about this film from you Vineeth Chetta. You made me feel the entire film in that narration, now I can wait to start making it for others to feel what I felt. Need everyone’s blessings for my next film… it’s a special one.”

Been waiting to announce this one... ♥️ #nextproject #livingthedream pic.twitter.com/UnBaJTRSaO

(The above story first appeared on LatestLY on Dec 03, 2019 10:09 AM IST. For more news and updates on politics, world, sports, entertainment and lifestyle, log on to our website latestly.com).