Indian Navy Day 2020 is celebrated on December 4 every year. It is that day when the navy personnel are lauded for their service to the nation. Tollywood superstar Mahesh Babu on Twitter has saluted the courage of the navy people. Check it out. 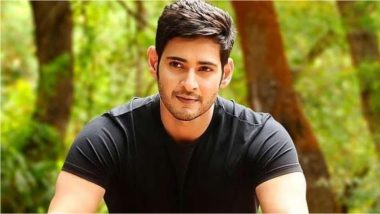 On December 4 every year Indian Navy Day is celebrated in India. On this day, the bravery of our navy personnel gets lauded as it is because of them that we all are safe. It was on this day in 1971 when the Indian Navy defeated four Pakistani vessels in a war. Even the ones who martyred in the Indo-Pakistan War are remembered today. Now, Tollywood superstar Mahesh Babu took to his Twitter and stood in honour of the nay personnel. Indeed, such days need to be given the importance they deserve. David Warner Gives Mahesh Babu a Run for his Money as he Delivers Dialogue From Superstar’s Movie Pokiri (Watch Video).

In his tweet, the actor joined hands and expressed how he is grateful to all in the Indian Navy for showing courage and also providing service to the citizens of the country. "Standing in honour!! Saluting our Navy personnel on the occasion of Indian Navy Day today! India will always be grateful for your unwavering courage and service to the nation," he wrote on the micro-blogging site. Mahesh Babu to Play Double Role in Parasuram’s Sarkaru Vaari Paata?

Standing in honour!! Saluting our Navy personnel on the occasion of Indian Navy Day today! India will always be grateful for your unwavering courage and service to the nation. 🙏#IndianNavyDay

Meanwhile, on the professional front, Mahesh Babu's next is titled as Sarkaru Vaari Paata in which he is paired opposite the pretty actress Keerthy Suresh. The actor is said to play dual roles. Helmed by Parasuram and bankrolled by Mythri Movie Makers, it is in January 2020 when the shooting of the film reportedly begins. Stay tuned!

(The above story first appeared on LatestLY on Dec 04, 2020 02:30 PM IST. For more news and updates on politics, world, sports, entertainment and lifestyle, log on to our website latestly.com).