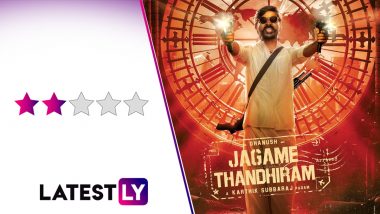 Jagame Thandhiram Movie Review: Before I talk about Dhanush's new film, Jagame Thandhiram that has released with much fanfare on Netflix and its director Karthik Subbaraj, let me first discuss a phenomenon in Indian cinema. For the sake of Tamil movie buffs, I would localise it to Kollywood and call it 'Venkat Prabhu' effect. You don't know what that is? Well, it is what happens when a talented, young filmmaker who won critical acclaim for his or her initial spate of films which had mostly newcomers, and then, on the basis of that well-earned recognition, go on to work with superstars. Which also results in the same filmmaker ending up giving his or her weakest films with them. Russo Brothers Wish Dhanush Good Luck for Jagame Thandhiram, the Actor Responds.

Now the reason for doing so can't exactly be pointed to one reason. Maybe their awe for the superstar compromises on the quality of their work. Maybe they have ran out of good ideas. Or maybe it is studio interference; bigger the star, bigger the interference! Or maybe, the reason is a combination all three. In Tamil cinema, some very promising filmmakers have fallen to this trap, namely Venkat Prabhu (hence the name) and Pa Ranjith. Now add Karthik Subbaraj to the list.

Karthik, who made an excellent start with the arresting Pizza and the excellent Jigarthanda, has been on a downslide since then when it comes to his feature films. Petta, his film with Rajinikanth was enjoyable but it was burdened with a weak storyline and wasted an excellent supporting cast in its adoration of its lead megastar. Petta Movie Review: Rajinikanth Is on a Roll in Karthik Subbaraj’s Drawn-Out but Highly Watchable Entertainer.

What happened to Jagame Thandhiram is curiouser. Dhanush, for one, we know is more of a director's actor. He was stupendous earlier this year in Mari Selvaraj's Karnan, and in Jagame Thandhiram, the actor's swag and mass appeal continue to be on an excellent form. Karthik has also shot the film in a kind of stylish manner that would even appeal to international audience, especially helped by the fact that he beautifully uses the locales of Madurai and Britain courtesy Shreyaas Krishna's frames.

Yet, for all its few positives, Jagame Thandhiram is perhaps the filmmaker's weakest film to date, made even more annoying by its lumbering 138 minute-runtime and some very lazy and predictable writing.

Dhanush plays Suruli, an unapologetic gangster from Madurai, who also runs a hotel. He is hired by Peter Sprott (Game of Thrones' James Cosmo), a Britain-based gangster, to cancel out his nemesis. Peter is an ultra-right conservative who wants to extradite all the immigrants from the country. He is so drunk in his white privilege that even his car-plate reads 'White' Power'. So why did he bring a Madurai-based gangster to London to do his work?

The idea is understandable - the same way how British used Indian kings against each other to rule over India 200 years back. But why the dice fell on Suruli is something that is never explained at all. Sure the man has swag, his entry scene is mass level-MAX, and his energetic dance-steps to the "Rakita" track is foot-tappingly awesome! But we are not sure how Suruli's local exploits were enough to impress an infamous mob boss in London. Also, which IT appraisals discuss 'Best Gangster' in their meetings, that made Suruli's name reach the ears of Peter? Was that a satire or something that really happened? The joke was lost on me.

Anyway, Suruli reaches London, and he is tasked to take down the activities of Peter's rival, a Tamil gangster Sivadoss (Joju George). Within a few days, Suruli manages to get an entire blueprint of Sivadoss' activities, don't ask how. Though, for all his shrewdness, he misses out on one big undertaking of Sivadoss that made him a respected figure among the immigrant community. Revelling in the turf-war between Peter and Sivadoss, Suruli finds an opportunity to make himself richer. In the meantime, he also falls for Attila (Aishwarya Lekshmi), a single mother who sings at a pub.

In Jagame Thandhiram, we have an anti-hero who is unapologetically greedy and selfish, till of course, the screenplay realises that the audience also needs to root for him and therefore turns him to a new leaf. Dhanush is having fun in the role, and it is quite evident in every scene he is in. While it is a pleasure to see him own the show like a boss, I wish I also had the same kind of fun watching it. Jagame Thandhiram: From Vijay Sethupathi’s Pizza to Rajinikanth’s Petta, Ranking All Karthik Subbaraj’s Feature Films From Worst to Best.

It is not that I have to root for a hero who is not exactly worth rooting for. Growing up on films like The Godfather, Scarface, Nayagan, Thalapathi, Abhimanyu et al, I have had my share of anti-heroes drawn into the world of crime. The problem with Suruli is that Dhanush's swag doesn't really gel well with the character's activities. But that's the least of the film's problems.

The bigger problem here is Jagame Thandhiram is a very stretched out saga that is predictable to the core, is saddled with lazy tropes (strange coming from the director of Pizza and even, Mercury) and like Petta, wastes a talented supporting cast. The storyline is strangely familiar. The concept of man plucked out of obscurity to end a powerful gangster has been seen before. Mallu fans might remember Mohanlal doing so in the 1990 film Indrajaalam.

After The Family Man season 2, we have yet another film that turns the Sri Lankan Tamil migrant crisis into such a weak footnote. There are plenty of loopholes, too. (SPOILERS ahead) Why does Sivadoss trust Suruli enough to spare his life, when the latter had just killed several of his men? Why would Attila fall for Suruli, who was acting creepy with her right from the start? Also, what's the scene of Suruli's first bride running away after their wedding night? It's strange that she never realised that he was a gangster before, when he never ever tried to repress his identity. Why can't these mass movies write a good female part for its leading actress, other than making them a victim, an arm-candy or a catalyst for the hero to change himself? Aiswarya Lekshmi deserves better. Joju George, who is effective in every scene he has for his limited screentime, deserves better. And James Cosmo, with his bellowing laughter and caricatured characterisation, gets to drop a lot of f-bombs, which I think is more directed towards the writing for his role.

Is Jagame Thandhiram a complete washout? Apart from that Dhanush show, there are occasional flashes of Subbaraj's craft that the movie desperately needed. The mid-point sequence, where Peter and Sivadoss meet for the first time is a fine sequence, especially the revolving camera-work used to portray the shifting the power-balance. Subbaraj also inserts some nice detailing and metaness to the narrative. Like the two times Peter's men attack Sivadoss' materials, they use masks seen out of The Dark Knight and The Town. Peter's office room has a KKK outfit as seen in the climax. Also, like most of his films, the ending is easily the best part of Jagame Thandhiram, which really makes us wish the rest of the film lived upto its subversive conclusion.

(The above story first appeared on LatestLY on Jun 18, 2021 04:36 PM IST. For more news and updates on politics, world, sports, entertainment and lifestyle, log on to our website latestly.com).