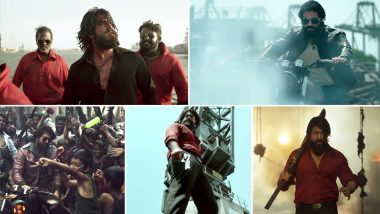 After performing exceedingly well over the first weekend, the Hindi version of KGF Chapter I continued its good run at the box office even on the crucial Monday.  Starring Yash and Srinidhi Shetty in the lead, the big budget Kannada film has been dubbed in Tamil, Telugu, and Malayalam as well. And what's impressive is that the film has done well in all languages. The Hindi version, which is backed by Farhan Akhtar's production company Excel Entertainment, collected Rs 9.20 crore over the weekend. On Monday, KGF minted Rs 2.90 crore, bringing its total four-day collection to Rs 12.10 crore. KGF Box Office Collection Day 3: Yash's Film Does Well Over the Weekend, the Hindi Version Collects Rs 9.20 Crore.

Apart from faring well in India, Yash's film has also got cash registers ringing in the USA. The film has already surpassed the $300K mark at the USA box office and is the fastest Kannada movie to do so.

Though KGF released alongside Shah Rukh Khan's Zero, the former hasn't suffered at the box office because of the latter. Despite the great buzz and a terrific star cast, Zero, unfortunately, opened to negative reviews and couldn't impress the audience as well. As a result, Khan's film has underperformed at the Indian box office so far. Zero Box Office Collection Day 3: Shah Rukh Khan Starrer Rakes in Rs 59.07 Crore in Its Opening Weekend.

(The above story first appeared on LatestLY on Dec 25, 2018 12:02 PM IST. For more news and updates on politics, world, sports, entertainment and lifestyle, log on to our website latestly.com).