Maha Samudram: Sharwanand And Siddharth’s Epic Tale Of ‘An Immeasurable Love’ To Release In Theatres On August 19! (View Poster) 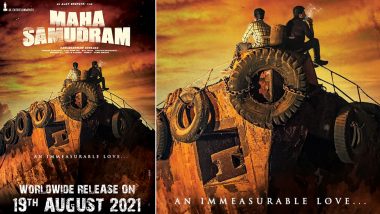 Maha Samudram, simultaneously shot in Telugu and Tamil languages, stars Sharwanand, Siddharth, Aditi Rao Hydari and Anu Emmanuel in the lead. The film is written and helmed by Ajay Bhupathi, who had made his directorial debut with RX 100. Touted to be an intense love story, an action drama and an emotional roller-coaster, the makers of this upcoming flick have announced the release date. Maha Samudram, set in Visakhapatnam, is all set to be released after Independence Day 2021. It is hitting the theatres on August 19. Maha Samudram: Siddharth Returns to Telugu Cinema with Ajay Bhupathi’s Directorial (Watch Video).

The makers of Maha Samudram have shared a brand new poster, featuring Sharwanand and Siddharth seated on a ship that looks all rusty. The actors are seen back facing each other, and the former is seen smoking a cigarette. Besides featuring the leading men and the mentioning the release date of the film, the poster also comes with a tagline that reads ‘An Immeasurable Love’. This bilingual indeed looks like a promising tale. While sharing this announcement, the makers captioned the post as, ‘Our Sail in Theatres Begins this August 19th. Join this Voyage to witness an Epic tale of #ImmeasurableLove’. Maha Samudram: Aditi Rao Hydari Joins The Cast of Siddharth and Sharwanand's Film As The Leading Lady.

The music of Maha Samudram is composed by Chaitan Bharadwaj, the one who had also composed Ajay Bhupathi’s film RX 100. The film is bankrolled by Anil Sunkara under AK Entertainments banner.

(The above story first appeared on LatestLY on Jan 30, 2021 09:53 AM IST. For more news and updates on politics, world, sports, entertainment and lifestyle, log on to our website latestly.com).