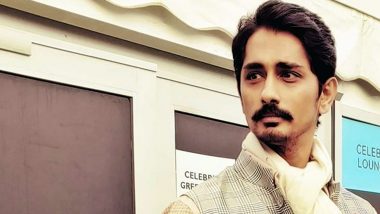 Siddharth is one of the versatile actors of Indian Cinema. He has essayed a variety of roles and has been simply brilliant in his works. The actor has majorly featured in south films and also a few Hindi movies as well. The actor is all set to return to Telugu Cinema with Ajay Bhupathi directorial Maha Samudram. Since quite a long time there have been rumours that Siddharth has been roped in the upcoming bilingual flick, but there was no official update. The makers have now shared a video and an official statement on Siddharth being on board for Maha Samudram. Maha Samudram: Actors Siddharth and Sharwanand Roped in for Ajay Bhupathi’s Film?

The statement issued by AK Entertainments read, “Multifaceted actor Siddharth who was last seen in a dubbed film Gruham comes on board to star in the crazy multi-starrer. This indeed marks Siddharth’s comeback to Telugu film industry after long time. Siddharth was looking for appropriate script for his comeback film in Telugu and he finally finds one.” It further mentioned, “It will be an eye pleasing to see two talented actors Sharwanand and Siddharth sharing screen space together in a film with powerful script penned by Ajay Bhupathi.” Sai Pallavi to Star In Ajay Bhupathi’s Film Maha Samudram?

Siddharth On Board For Maha Samudram

Maha Samudram is touted to be an intense love and action drama. The film will be bankrolled by Sunkara Ramabrahman under the banner of AK Entertainments. The makers are yet to announce about the film’s lead actress and other key details.

(The above story first appeared on LatestLY on Sep 18, 2020 10:26 AM IST. For more news and updates on politics, world, sports, entertainment and lifestyle, log on to our website latestly.com).