Majili is a romantic drama directed by Shiva Nirvana that starred Samantha Akkineni and Naga Chaitanya in the lead. 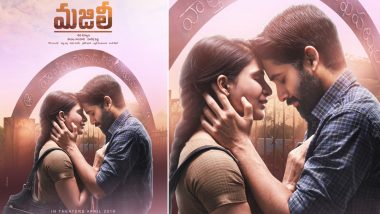 Majili is a very special film to Samantha Akkineni and Naga Chaitanya as it happens to be the couple’s first movie post marriage. Yes, this is the first film for which they came together after their wedding and it has shined at the box office. Fans and critics are mighty-impressed with the couple’s performance and of the romantic drama was beautiful, said the viewers. But as the cast and crew were waiting for the response from the audience, what they get to hear is that their film has been leaked online. Yes, Majili faced the wrath of online piracy but even then it emerged as a winner at the box office. Samantha Akkineni-Naga Chaitanya Look Calm and Adorable in This Picture, Is It the Majili Effect?

Majili hit the screens on April 5 and in two days it has seen a fabulous response at the ticket windows. And since the film released a day before Ugadi, the occasion been a public holiday, footfall seen at multiplexes were high. As per a report in Telugu 360, Majili managed to earn more than what the blockbuster film F2 – Fun and Frustration collected. Trade analyst Ramesh Bala wrote, “Join the roller coaster ride of emotions #Majili at the cinemas near you. #BlockbusterMajili Minted a worldwide Gross of 21Crores in 2 Days. @chay_akkineni @Samanthaprabhu2”. Majili Full Movie Leaked Online by TamilRockers, Samantha Akkineni and Naga Chaitanya’s Romantic Drama Available for Free Download.

Join the roller coaster ride of emotions #Majili at the cinemas near you.#BlockbusterMajili Minted a worldwide Gross of 21Crores in 2 Days. @chay_akkineni @Samanthaprabhu2

Majili is a romantic drama directed by Shiva Nirvana. Be it the posters, teaser or the trailer, and now the film, it opened to positive responses. Despite been leaked online by the TamilRockers, the film has managed to garner good figures at the ticket windows. Let’s wait and watch how it performs in the coming days.

(The above story first appeared on LatestLY on Apr 07, 2019 03:34 PM IST. For more news and updates on politics, world, sports, entertainment and lifestyle, log on to our website latestly.com).