Master starring Thalapathy Vijay and Vikay Sethupathi released on January 13, 2021. Amid this, the latest we hear is that the Chennai Police has booked Kasi theatre in Ashok Nagar for flouting the social distancing rules at the screening of Vijay starrer. Read on. 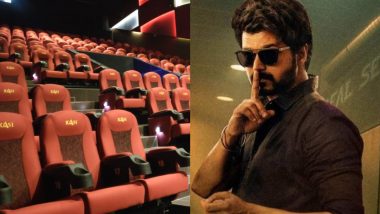 Master starring Thalapathy Vijay and Vikay Sethupathi has been one of the most awaited South films of 2021. With two supreme faces in one frame, this one is expected to revive the theatre owners after coronavirus massively affected their business last year. Master released on January 13, 2021, and minted Rs 35 crore gross (TN+AP) on its first day. While a huge sum at the ticket window is indeed big news, what we saw on the FDSF, was crowded theatres with only a few adhering to COVID-19 rules. Master Box Office Collection Day 1: Vijay And Vijay Sethupathi's Film All Set To Revive Cinemas Post COVID-19, Earns Rs 35Crore Gross As Per Early Estimates.

Amid this,  the latest we hear is that the Chennai Police has booked Kasi theatre in Ashok Nagar for flouting the social distancing rules at the screening of Vijay starrer. As per the government rule, only 50% occupancy is allowed in the theatres, but the management of Kasi reportedly allowed more people to enter their premises. As per by The News Minute, the theatre was booked under Sections 188 and 269 of the Indian Penal Code (IPC). Master: FIR Filed Against Producer Xavier Britto for Playing Thalapathy Vijay Songs From Other Movies During the Audio Launch.

However, what followed was not a great punishment. As reportedly, the theatre owners were charged a fine of just Rs. 5,000, which led to many pointing over the efficacy of rules. Master Movie Review: Thalapathy Vijay and Vijay Sethupathi Take Their Sweet Time To Come to Blows in Lokesh Kanagaraj’s Tiresome Entertainer (LatestLY Exclusive).

This is not the first time, the movie has churned negative news, as recently an FIR was filed against the producer of the film for violating copyright laws at Master's audio launch event. Helmed by Lokesh Kanagaraj, this one also features Malavika Mohanan, Arjun Das, Andrea Jeremiah and Shanthanu Bhagyaraj in pivotal roles. Stay tuned!

(The above story first appeared on LatestLY on Jan 14, 2021 08:18 PM IST. For more news and updates on politics, world, sports, entertainment and lifestyle, log on to our website latestly.com).