Master is a mass entertainer that is directed by Lokesh Kanagaraj, who earlier made the 2019 film Kaithi. Thalapathy Vijay is the main lead, while Vijay Sethupathi is the antagonist. The film also stars Malavika Mohanan, Andrea Jeremiah, Nasser, Arjun Das and Shantanu Bhagyaraj. 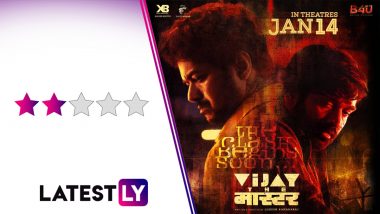 Master Movie Review: Lokesh Kanagaraj's latest, Master, is an unusual movie. It gives a good backstory to the villain, played by Vijay Sethupathi, even dedicating the first fifteen minutes of the film for the same. What's more, Sethupathi's Bhavani is also shown to be a religious person in a secular way, wearing amulets of three different religions, 'cos as he claims, he isn't sure which God can come to his help. On the other hand, the hero, Thalapathy Vijay's JD is a persistent alcoholic. He doesn't come with a backstory, which is anyway explained through one throwaway line and acts often irresponsible. In that way, Master is definitely an unusual movie for its genre. Master: Thalapathy Vijay’s Film Turns Out Perfect Pongal Treat! Fans Watch FDFS And Share Reviews On Twitter.

Being unusual doesn't make it good though, but let's talk about that in a bit. So JD is a 'Master' at St Jeffrey college, where he teaches M.Phil course and is also the Dean of Student Affairs. He is a favourite among most of the students, who blindly revere him, even disregarding the fact that he comes with heavy hangover to college. Can't help but draw parallels to Vijay's reel persona in the film to that of his real influence, where his fans are thronging theatres, even disregarding COVID-19 protocols even when what he offers are flawed products. The parallels don't end there, though.

When a student election, carried under his supervision, ends up creating a ruckus, JD has to take a three-month break from teaching at the college. His benefactor (Nasser) sends him to be a 'master' at a Government Reformatory in Nagercoil, a juvenile correction centre. The place is, however, ruled by an iron-fisted Bhavani, who, from the outside, uses the kids there as scapegoats to hide his criminal activities while supplying drugs and booze to them. How JD reforms his ways, and then reforms his wards, while tackling Bhavani is what the rest of Master is about.

While watching Master, I couldn't help but think of Petta. Master and Petta have some commonalities, which includes actors like Sethupathi and Malavika Mohanan. At least in terms of how it uses these two actors, Master fares better than Petta. While Sethupathi was also a villain in the Rajinikanth starrer, he had more scope to shine in Master, and it is the scenes involving this incredible actor that make for the film's more engaging portions, thanks to his irreverent dialogue delivery. He also proves to a more credible foil to Thalapathy's hero, compared to the other antagonists in Vijay's recent films. Though after a nuanced backstory, he is relegated to being a typical villain and nearly gets lost in the film's hero-worshipping.

Malavika Mohanan had a small role in Petta, where she played mother to a teenager! Here in Master, she plays her age and gets to have a romantic angle with the hero, playing his colleague with a conscience. While I see that as an improvement, her character doesn't get much to do, save for giving the hero a reality check, batting eyelashes at him and then needs saving from the baddies. You know, typical Thalapathy heroine stuff. Master: Before Clashing With Thalapathy Vijay, 5 Times Vijay Sethupathi Experimented With Grey Shades in the Past.

Beyond the actors, what's one more common between Petta and Master is both suffer from the same syndrome - talented directors blinded by their lead star's superstar charisma and end up making an inferior film. If Karthik Subbaraj ended up making an appealing but forgettable Thalaiva movie, then it was frustrating to see Lokesh Kanagaraj also falling for superstar flick tropes and create a product that is only appealing to Thalapathy's die-hard fans.

His debut film Kaithi was one of the best thrillers I had seen in the past couple of years. Even while narrating an engaging storyline, he didn't refrain from not adding mass moments in the narrative. Remember that iconic sequence where Karthi had biriyani from a large container lid? Or when he takes down baddies using a gatling gun in the explosive climax? Sadly, Master comes nowhere in its league.

It's not that Lokesh is out of form here. The way he crafts some of Thalapathy's mass scenes with some refreshing tweaks are entertaining to watch. It also helps that Vijay, even when stuck in one of his usual roles, is on scintillating form here. From his drunken stupor to using premises of popular films to narrate his 'backstory', Thalapathy is seen having fun with the role. He even scores in the emotional scenes, though he struggles a bit when it comes to crying (the director shows some smartness by making JD claim that he can't cry). Even the shades that he wears is to hide his hangover, rather than being a style statement. Anirudh's masterful score amps up the mass appeal, even in the most ordinary scenes.

At one point, JD tries to recreate Thalapathy's trademark throwing-gum-in-his-mouth fete and fails, to which his colleague Vanitha (Andrea Jeremiah) asks him to not to do gimmicks. Unfortunately, the rest of the film feels more of a gimmick to play along with his superstar image, with the BG score even hailing him as 'Thalapathy'. If that's not enough, we have scenes that have Vijay monologuing on the importance of politics (though the Censor Board mutes a dialogue that criticises the government), making Master another film that hints at its lead superstar's future political aspirations.

While Kanagaraj's direction at least gives Master a polished treatment, it is the writer in him that disappoints. Along with the the editing. It takes nearly 20 minutes just to create a buildup for its lead star, and it takes Master to reach its interval point to even have its first interaction scene between the villain and the hero. Even that's not a direct confrontation.

The second half, that gets into Do Aankhen Barah Haath territory, feels more meaty than the first half, but it continues to be stretched. The proceedings feel tiresome as Vijay bashes more people and lectures others, as we wait for Master to finally bring both the Vijay's onscreen together. By the time that happens, we would have run out of patience. At a nearly three-hour-runtime, Master is no doubt over-blown, and in times of COVID-19, it feels a little irresponsible, considering the film offers little substance.

Among the supporting cast, Shanthanu Bhagyaraj and Andrea get no scope. Arun Das, who was impressive in Kaithi and last year's Andhaghaaram, makes his presence felt with his deep baritone as Das, Bhavani's main minion in the correction centre. The kid who plays the young Undiyal is another standout actor. The action scenes are just about okay (the bow-fight sequence in the pre-climax is just silly), but Sathyan Sooryan's cinematography is impressive.

- Thalapathy Vijay In His Usual Elements

In one scene, Thalapathy Vijay's JD tells a prison inmate that he has zillions of people outside who like him, which is no doubt a wink-wink reference to his terrific fan following. I only wish that he also be part of films that live up to the adoration that these fans have form. Master, unfortunately, isn't that where more than the star, it is the director who let me down. Watch Master at your own health risk, literally!

(The above story first appeared on LatestLY on Jan 13, 2021 02:23 PM IST. For more news and updates on politics, world, sports, entertainment and lifestyle, log on to our website latestly.com).