Master Director Lokesh Kanagaraj to Bring Mahesh Babu Onboard For His Next Film?

According to latest media reports, director Lokesh Kanagaraj is planning to rope in Mahesh Babu for his next project. 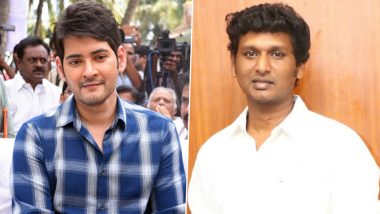 Filmmaker Lokesh Kanagaraj had made his directorial feature debut with the film Maanagaram that released in 2017. Then in 2019, his film Kaithi released and that even turned out to be a huge hit at the box office. The director is waiting for Thalapathy Vijay starrer Master to hit the big screen. The movie was scheduled to be released in April, however, it had to be postponed owing to the coronavirus outbreak. Now it is heard that Lokesh is planning to bring Mahesh Babu onboard for his next project, reports The Hans India. Sarkaru Vaari Paata: Here’s What Mahesh Babu Has to Say about the Release of His Upcoming Telugu Film!

Neither Lokesh Kanagaraj nor Mahesh Babu have mentioned anything about any new projects. Reports are rife that this new project would be a bilingual film and would be bankrolled by Mythri Movie Makers. We wonder if the Tollywood hero would be making announcement on the occasion of his birthday. Mahesh Babu is turning a year older on August 9. The actor usually opts for special occasions to make announcements regarding his upcoming films. Thalapathy Vijay Starrer Master Will Not Skip Theatrical Release! (Read Statement).

Meanwhile, Mahesh Babu will next be seen in Sarkaru Vaari Paata. The film is directed by Parasuram who is widely known for his directorial project Geetha Govindam. The film is expected to release in 2021.

(The above story first appeared on LatestLY on Aug 06, 2020 12:03 PM IST. For more news and updates on politics, world, sports, entertainment and lifestyle, log on to our website latestly.com).