Malayalam actor Mohanlal, who celebrates his 62nd birthday today, has acted in more than 400 films and won numerous prestigious accolades for his performances. Let’s a look at some of his classic movies from the ’90s that will always remain every Lalettan fans’ favourite. 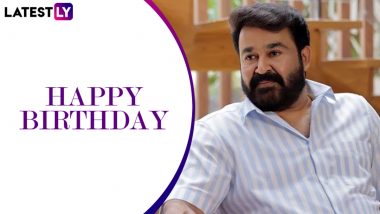 It has been more than four decades since Mohanlal has been entertaining the movie buffs. We have seen him on the big screen as an adorable son, a responsible brother, a charming lover, a spoiled brat, a crime boss, an entrepreneur and so much more. His choice of films and roles over the years have been simply impressive. Lalettan, as he is fondly called, is one of the finest gems in the world of cinema. The Malayalam actor, who celebrates his 62nd birthday today, has acted in more than 400 films and won numerous prestigious accolades for his performances. 12th Man Movie Review: Mohanlal Turns Desi Hercule Poirot in Jeethu Joseph's Twisty Murder-Mystery That Keeps You Guessing Till the End.

Mohanlal has won five National Film Awards, Padma Shri, Padma Bhushan and many other prestigious honours over the years. Other than Malayalam, he has also acted in a few Hindi, Tamil, Telugu and Kannada films. On the occasion of his birthday, let’s a look at some of his classic movies from the ’90s that will always remain every Lalettan fans’ favourite.

The musical drama is considered as one of the best films of Mohanlal and it earned him the National Film Award for Best Actor. His role as a Carnatic singer who is burdened by a jealous brother (played by Nedumudi Venu) was lauded by critics and fans.

Mangalassery Neelakandan is one of the most popular and loved characters of Mohanlal. Helmed by IV Sasi and written by Ranjith, this film is regarded as a cult classic. The film revolves around rivalry between two spoiled heirs of two feudal families.

Lalettan’s role as Dr Sunny Joseph, a psychiatrist, is another iconic role portrayed by him in the Fazil-directed cult classic. It even won the National Film Award for Best Popular Film Providing Wholesome Entertainment.

Mohanlal starred in Priyadarshan’s film that revolves around the lives of prisoners in British India who are brought to Kaalapani. Lalettan, who plays the character Dr Govardhan Menon, gets imprisoned after being wrongly accused of bombing a train that also included British officials.

It was his first non-Malayalam film helmed by Mani Ratnam. He portrays the character of a movie star turned politician. Lalettan’s character in the film was inspired MG Ramachandran and this role essayed by him is considered to be extraordinary.

These are a few of the best movies of Lalettan from the ’90s. There are numerous hit films given by him over the years and one just can’t thank him enough for being such a brilliant actor and giving the audience innumerable films to cherish until eternity. Here’s wishing the superstar Mohanlal a very happy birthday!

(The above story first appeared on LatestLY on May 21, 2022 12:01 AM IST. For more news and updates on politics, world, sports, entertainment and lifestyle, log on to our website latestly.com).