Reports are doing rounds citing that Drishyam 2, helmed by Jeethu Joseph, will be remade in Telugu as Drushyam 2 with Venkatesh Daggubati in the lead. 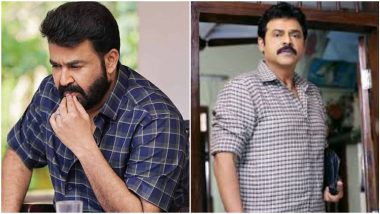 Drishyam 2, starring Mohanlal and Meena in the lead, is all set to be premiered on Amazon Prime Video on February 19. It is a sequel to the 2013 released Malayalam movie that was not only a huge hit, but was even remade in six other languages and they are Kannada, Telugu, Tamil, Hindi, Chinese and Sinhalese. The Telugu version was titled as Drushyam and it had starred Venkatesh Daggubati as the male lead. Meena who had featured in the original film, had reprised her role in the Telugu version as well. Drishyam 2 Movie: Review, Cast, Plot, Trailer, Streaming Date and Time of Mohanlal, Meena's Film Releasing on Amazon Prime Video.

Now reports are doing rounds citing that Drishyam 2, helmed by Jeethu Joseph, will be remade in Telugu as Drushyam 2 with Venkatesh Daggubati in the lead. The 2014 released film was directed by Sripriya and as per a report in TNM, Drushyam 2 will be helmed by Jeethu himself. The report also suggests that the film could go on floors by March first week. Drishyam 2: Pics Of Mohanlal And Meena’s Reel Family That You Must See Before The Film Releases!

About the shoot of Drushyam 2, the source was quoted as saying, “Everything happened in a flash. If things go as planned, the shoot of Drushyam 2 will begin in March first week with all COVID-19 protocol in place. Every logistical part is being fast-tracked so that film could be wrapped up as early as possible.” However, an official announcement is yet to be made!

(The above story first appeared on LatestLY on Feb 18, 2021 02:57 PM IST. For more news and updates on politics, world, sports, entertainment and lifestyle, log on to our website latestly.com).