Ayyappanum Koshiyum is the hit Malayalam film starring Prithviraj Sukumaran and Biju Menon in the lead. The film is being remade in Telugu with Pawan Kalyan and Rana Daggubati in the lead, 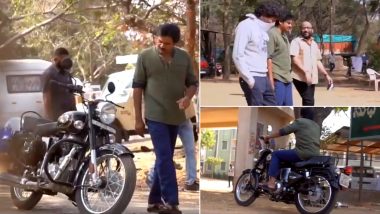 Ayyappanum Koshiyum is the hit Malayalam film that released in February 2020. Starring Prithviraj Sukumaran and Biju Menon in the lead, the movie had opened to positive reviews. The film is being remade in Telugu with Pawan Kalyan and Rana Daggubati in the lead, tentatively known as #PSPKRanaMovie. The shooting of the film has commenced in Hyderabad and the makers have shared a BTS video of the same. Pawan Kalyan and Rana Daggubati To Reprise Biju Menon and Prithviraj Sukumaran's Roles In Ayyappanum Koshiyum Telugu Remake (Watch Video).

Directed by Saagar K Chandra, the BTS video gives a glimpse of how the entire cast and crew members are adhering to the COVID-19 safety protocols and setting up for the shoot. Trivikram has penned the screenplay and dialogues, whereas Thaman S has been roped in to compose the music of this untitled project. The video also reveals that the makers are eyeing to release the film in 2021.

Watch The BTS Video Of #PSPKRanaMovie:

Besides this Pawan Kalyan and Rana Daggubati have a few intriguing films lined-up. PSPK will next be seen in Vakeel Saab. He also has untitled project with Krish, Harish Shankar and Surender Reddy. On the other hand, Rana has Viraata Parvam and Haathi Mere Saathi in his kitty.

(The above story first appeared on LatestLY on Jan 26, 2021 01:01 PM IST. For more news and updates on politics, world, sports, entertainment and lifestyle, log on to our website latestly.com).